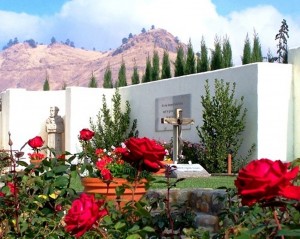 National Farm Worker Ministry Executive Director Virginia Nesmith, NFWM California Organizer Lucy Boutte, and founding NFWM Director Rev. Chris Hartmire and his wife Jane along with several other past and present board members of NFWM will be attending the establishment of the César E. Chávez  National Monument on Monday, October 8 in Keene, CA. President Barack Obama will be traveling to Keene to make the announcement at La Paz.

The following is Virginia’s statement responding to the announcement from the White House, as well as the press release itself.

The National Farm Worker Ministry (NFWM) congratulates President Obama, the United Farm Workers and the César Chávez Foundation on the establishment of the César E. Chávez National Monument at La Paz. We  are grateful to the President and all those who helped bring about this honor – an honor not only for the work of César Chávez but for that of his family and all the farm workers whose sacrifices helped build the first successful farm worker union in the United States.

César Chávez and his legacy are a national treasure, and this monument recognizes that. César’s gifts included both his own tremendous focus and commitment, and his ability to get thousands of people throughout the country to commit their time, talent and hearts to a movement to empower farm workers to improve their workplaces and communities.  This monument will lift up the value of service to others.  And it will draw the nation’s eye to the importance of the farm workers we all depend on for the food that fills our kitchen tables.

National Farm Worker Ministry (NFWM) is a faith based organization committed to justice for and empowerment of farm workers. NFWM was recently honored by delegates at the UFW’s Fiftieth Anniversary Convention for the support provided by religious leaders and people of faith since the union’s beginning day.  NFWM continues to partner with farm worker groups nationwide as they organize for justice.  NFWM staff and board members, who represent national denominations, religious orders, and state and regional organizations, join me in celebrating the establishment of this very special monument and all that it represents.

The White House Office of the Press Secretary, For Immediate Release: