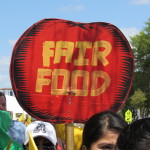 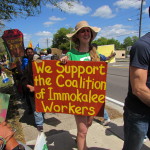 Sign the Petition!
The Coalition of Immokalee Workers is urging supporters to sign a message for Wendy’s CEO Emil Brolick calling on Wendy’s to join their Fair Food Program, agree to pay a penny more for every pound of tomatoes picked, and commit to a zero-tolerance policy for sexual harassment, child labor, and modern-day slavery for Wendy’s Florida tomato suppliers. The petition will be hand-delivered to Mr. Brolick at the 2015 Wendy’s shareholders’ meeting in Dublin, Ohio. Please add your name to the petition here!

Student Boycott Announced
Emil Brolick was president when Taco Bell signed the first Fair Food Agreement with CIW in 2005, after a successful student-led boycott. At that time, he said in a press release that “any solution must be industry-wide.” Now, as president and CEO of Wendy’s, Emil Brolick has refused even to talk with CIW, much less commit Wendy’s to the Fair Food Program. So, on March 21st, the Student/Farmworker Alliance announced a nationwide student-led boycott of the fast-food chain. It will be launched at Ohio State University and will snowball over the coming months as more universities adopt the boycott.