From: Coalition of Immokalee Workers (CIW)

Over a decade ago, farm workers with CIW created the award-winning Fair Food Program, a uniquely successful program of worker-led monitoring and enforcement that has virtually eradicated long-standing human rights abuses, from sexual assault to modern-day slavery, for tens of thousands of farm workers under its groundbreaking protections.

For nearly a decade, farm workers and consumers have been demanding long- overdue justice for the women and men who harvest Wendy’s produce, but Wendy’s leaders have failed to bring the company into the Fair Food Program. And now, a group of Wendy’s very own shareholders is calling for the removal of four long-serving members of Wendy’s Board of Directors, in an effort to hold the Board accountable for Wendy’s failure to listen to its shareholders and adequately address its “longstanding troubling record on oversight of risks related to human rights and worker protections in its food supply chain.” 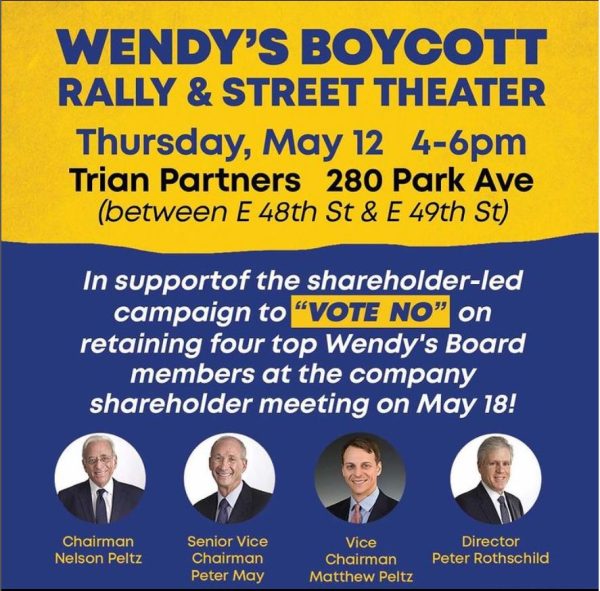 Ahead of the upcoming Wendy’s shareholder meeting, taking place on May 18, Investor Advocates for Social Justice joined forces with the widely-respected corporate watchdog Majority Action to file a devastating new analysis with the U.S. Securities and Exchange Commission that laid out in painstaking detail the history of the failure of Wendy’s Board of Directors to adequately respond to a 2021 shareholder resolution on worker protections in its food supply chain that won over 95% of the vote. The analysis concludes those failures are due to “the “disproportionate influence of Nelson Peltz and Trian Partners of Board leadership positions.”

Join farm workers and New York City area allies on Thursday, May 12 to amplify the shareholder-led “Vote No” campaign and call on Wendy’s to finally join the Fair Food Program!

Register to attend the rally.

Read this article from The Guardian about Wendy’s failure to join the Fair Food Program.

Read more about the Wendy’s Boycott and NFWM’s involvement in the campaign.