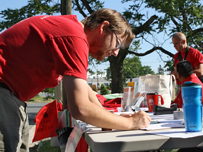 “On April 16th, a bipartisan group of senators came together and officially introduced their immigration bill. It includes an incredible victory for us — a path to citizenship for 11 million undocumented Americans. This is truly a historic accomplishment!

The comprehensive immigration reform proposal, including its agricultural provisions negotiated by the United Farm Workers and major grower associations, fulfills the urgent need for an earned legalization program that enables undocumented farm workers who are the backbone of the nation’s agricultural industry to swiftly obtain legal immigration status. It will also stabilize the farm labor workforce through incentives for immigrants to continue working in U.S. agriculture. The comprehensive measure would allow many undocumented farm workers to earn legal status by continuing to work in agriculture as well as offer the same protections to their immediate family members.

But our fight is far from over. In fact, it’s really just beginning. Over the next several months, Congress will debate and decide if this bill becomes law. We already know that at every step in the process, anti-immigrant politicians will try to kill the pathway or water it down. That’s why we must fight to protect what we’ve built and make it stronger.

Tell your senators to protect the path to citizenship in the Senate’s immigration bill — we’ve come too far to turn back now.“