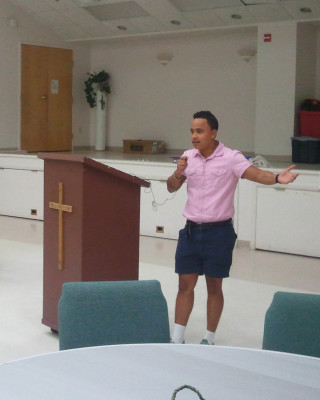 It was great to be among new and old supporters of the PSC’s work. Under the new leadership of Patricia Plantamura, the PSC Berry Fest ran smoothly as ever!

Maria McCourt, current chair of PSC, opened up the Berry Festival by thanking Patricia for all the work she has done so far with the PSC such as, the connections she has made with local allies and church supporters. Maria also gave PSC members an update on the strawberry workers this season and how the erratic weather (freezes, blazing hot the next day) has affected their harvest this year.

After Maria spoke, I discussed YAYAs current projects – supporting the FLOC campaign through Wawa actions, the CIW “Now is the Time” tour, and leadership development – and what we look forward to throughout May. After a short discussion with PSC members around what’s Publix’s next move, we heard from Patricia.

Being new to the position and the farm worker movement, Patricia spoke to her most recent camp visit with Maria. She shared her story of having trouble finding the strawberry fields in Dover and asking some locals where the particular farm was. What was alarming to some, but not surprising to others was the reaction Patricia received when asking where this strawberry farm could be. The gentlemen replied with, “we don’t like those immigrants around here” and he could care less if they received the clothes and food Patricia was bringing. Her story set a tone of an all too familiar climate here in Florida – farm workers are not welcomed.

Closing the Berry Fest, we heard from Elisa Huapilla, a former North Carolina tobacco picker, who spoke about her experiences growing up as a migrant farm worker with her family. Though she did not get intimate with details, she profusely thanked the work of NFWM and YAYA for supporting farm workers as she described how the little opportunities from friends and allies during her time felt like a holiday when her family needed it the most. Elisa is not an organizer with SEIU in Tampa and continues to fight for worker justice and supports other social justice causes throughout the state.

Overall, the PSC Alternative Berry Fest was a success in my eyes. I saw more new faces than I have in years before, which fuels my drive to continue spreading awareness around farm workers. I am glad for the work the PSC is doing in the Tampa area and look forward for more opportunities that PSC and YAYA-NFWM can work together.