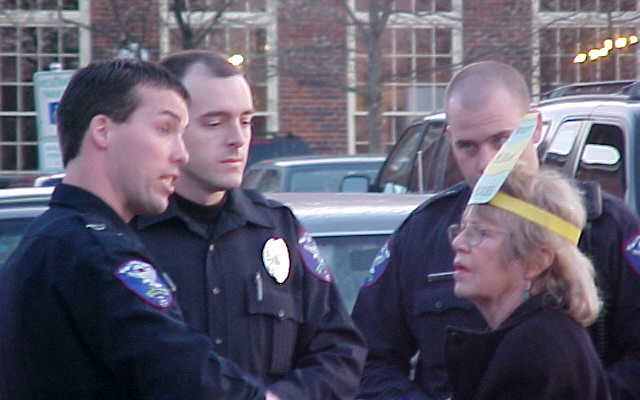 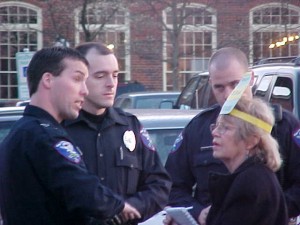 Former National Farm Worker Ministry Board Member Joan Papert Preiss, passed away on June 1, 2012 in Durham, North Carolina.   Joan was an amazing woman  – as her obituary published in the Raleigh News & Observer attests to, and re-printed below.   While those of us at NFWM knew of her love of family and her prowess at badminton, we mainly knew her as an activist extraordinaire; as a woman who had the creativity,  and the nerve, to fashion and wear a “boycott’ tiara on her head while  grocery shopping; who could stand up fearlessly to multiple policemen who challenged her rights,  whose artwork graced movement posters and banners, and whose commitment was an inspiration.   We are grateful to her husband Jack and to her family for choosing NFWM as a memorial fund for Joan, to help develop others who can carry on Joan’s legacy of determined and creative action in the pursuit of justice for  farm workers.  Not an easy task – we will miss her! 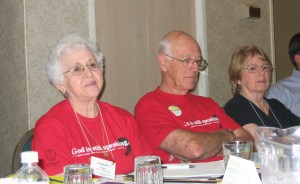 Joan Papert Preiss –  Such a wonderful human being, such a friend, such a brave soul, such a creative mind, such a loyal supporter.

It would take many more lines to ennumerate her attributes. One thing, we who  knew her would agree, is that all she was, all she did was for the love of justice.

We enjoyed her reports to the Board and her tiaras, necklaces and lapel buttons, she would call attention to them as she delivered a message no one could dispute. I can see her ready smile and her chuckles as she would relate her “adventures” facing not only policemen but CEOs of corporations with bravery and truth.

Finally, I salute Joan who incarnated our commitment of being an Interfaith organization.  We now have another guardian angel organizing those angels who don’t know much about the farm workers .

Joan left us on June 1, 2012 at the age of 87. Her passing at Yorktown Elder Care home was quiet and peaceful, with many of her family on hand. Her gentle end gives no hint of the varied and active life she led. Foremost in importance were Jack, her husband of 65 years, her sons Steven, Tony and Andrew, her daughters-in-law Angela, Leah and Alison, her grandchildren Robin, David, James, Sandy, and Rosalia, her brother Fred Papert, and her nieces Emily and Lisha. Gatherings of family and friends, especially around holidays and anniversaries, were events where her creativity blossomed. Her parties exhibited her unique talents as a cook and hostess. High spirits and sprightly humor permeated all her personal relationships. Whether it was playing softball in the street with her husband and grandsons, promoting Leah’s art as her “agent” in local bookstores, acting out dress-up Cinderella with Rosie, or poker games with Robin and David using dried beans for money, her enthusiasm and affection for her family were boundless.

Joan loved nature, and her herb and flower garden was one of her treasures. It was filled with roses, gardenias, lilac, rosemary, oregano, lemongrass, etc. Bird feeders surrounded the house, which was filled with her knitted curtains, hand-woven rugs, home-made sweaters and dresses, creatively painted walls and furniture. There was hardly any project she wouldn’t tackle with zest.
Her care and concern for others showed in numerous ways. After her recovery from triple-bypass surgery at Duke Hospital, she joined a volunteer group which visited and reassured patients about to undergo the same procedure. She signed on with the Durham Parks and Recreation Department to serve the low-income blind. There she created a program using sound (recorded bird calls) and touch (raised outlines of birds) to experience native birds.

The major event, which developed into her career, occurred in 1973 when she joined a young friend from Duke who was trying to start a movement to improve the living and working conditions of migrant farm workers in North Carolina. Thus was born the Triangle Friends of the United Farm Workers. From the beginning, the TFUFW became her signature organization, and she was it’s heart and soul for 35 years. During that momentous time, when Cesar Chavez and Dolores Huerta launched the United Farm Workers of America union in California, the TFUFW became one of it’s leading support groups in the eastern United States. Joan quickly established significant contacts at Duke University, arranging visits by Chavez and Huerta for speeches in Page Auditorium. She spoke on hunger and union issues to Duke classes, tutored Duke students for course credit, and led student and faculty groups to honor the successful national boycotts of grapes, lettuce and Mount Olive pickles.

As her influence and leadership grew, She began to hold office on state and national levels. She became secretary of the North Carolina Pesticide Board, and served on the Executive Committee of the National Farm Worker Ministry, based in St. Louis. She was a major ally and consultant with the Farm Labor Organizing Committee in Toledo, Ohio.

Despite all her accomplishments, Joan always regretted that she never went to college. Consequently she took classes to improve her reading skills, develop her artistic talent, and to improve her singing ability (the latter, alas, a failure). Undiminished and undaunted at every turn, she was truly a life long learner. Though hampered at times by debilitating illness, she fought and won her personal battles. She was a competitor. She loved to win, whether it was a game of Scrabble, entering a cooking contest, or playing her favorite sport, badminton, in which she accumulated countless gold medals at the North Carolina Senior Games. On the picket lines and on the badminton court, she played by the rules with dignity and courage. So goodbye, Joan, and thank-you for a life well-lived. You were beautiful.

There will be a celebration of Joan’s life on Saturday, July 14th at 3:00 PM at the Unitarian Universalist Fellowship, 4907 Garrett Road in Durham. There will be remembrances, music, videos and refreshments. A Memorial Fund is being established in Joan’s name at the National Farm Worker Ministry, 438 North Skinker Blvd, St. Louis, Missouri, 63130. This is a 501(c)3 organization. The fund will support a young person each year to work and learn about farm worker issues and programs. Contributions may be made to the Ministry specifying the Joan Preiss Memorial Fund.