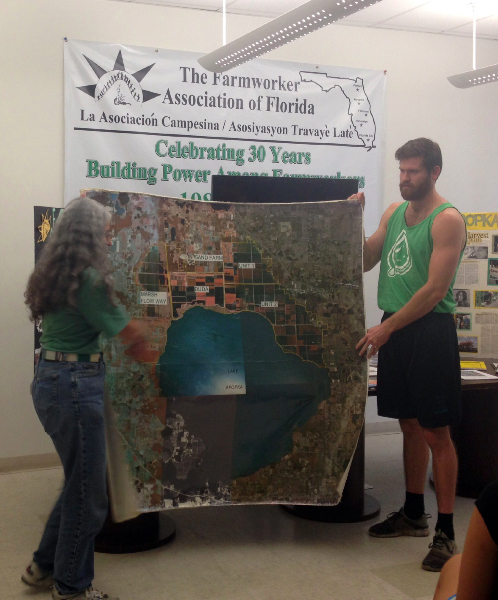 On Sunday, November 24th, five YAYA members met up with three Rollins College students at the Apopka office of the Farm Worker Association of Florida (FWAF) to learn some of the history of Lake Apopka – one of the biggest lakes in Florida – and about the effects that pesticides have had on the lake and its encompassing communities..

The Lake Apopka Toxic Tour started off in the FWAF office where our host and FWAF Pesticide Coordinator, Jeannie Economos, talked about the lake’s history and location.

Beginning in the 40’s, part of the lake used to be drained annually in order to access the rich soil beneath the water – this is known as muck farming. As a result of this specific type of faming, chemicals from the toxic pesticides that were used would run off into the lake through drainage canals. The pollution got so bad by the 80’s and 90’s that the lake was deemed a Superfund clean-up site, one of the most toxic and hazardous places in the country, according to our government.

In 1999, the Apopka area experienced a sudden and large-scale death of birds. An investigation by the U.S. Department of Fish and Wildlife determined it was caused by the amount of pesticides in the environment.

Although the pollution of Lake Apopka has been brought to light through various wildlife and conservation efforts, not much has been done to help the farm workers who have been affected by the pesticides that have destroyed the lake and its animal inhabitants. Many of the area’s farm workers have experienced the ill effects of pesticide exposure and, due to lack of concern by government officials, are still living in the same contaminated areas.

Although many of the former farm workers in the area are suffering from serious health issues, such as lupus, there has been little research done to investigate the correlation between pesticides and farm workers’ illnesses. How can this be possible when the death of birds effectively prompted an investigation?

To this day these farm workers are struggling to receive proper government attention regarding their claims that their ever-prevalent health problems are related to pesticide exposure.

From the tour it seemed as though restoration efforts were headed towards making the lake suitable for recreational purposes. Reflecting on the pea soup green color of the lake’s water, it’s apparent that a lot still needs to be done before this can be achieved.

I believe one of the first initiatives that must be taken is to rightfully give justice to the farm workers and communities of the Lake Apopka area, whether through helping out with the diseases that affect the communities or by cleaning up the peripheral neighborhoods of the Superfund site.

In addition to having to deal with the consequences of pesticide exposure, many of the former African American farm workers live less than a quarter of a mile from a Stericycle medical waste incinerator. This exemplifies environmental racism. The community lives nearby the incinerator and a playground is located right next to the incinerator’s tower.

It is our duty as members of the Central Florida community to fight alongside these communities that are suffering the effects of environmental racism and are neglected by our government officials.

The Lake Apopka toxic tour was a great event that educated us about Lake Apopka’s history and the issues related to the pesticide contamination of the area. It also prompted discussion and ideas on what could be done to further restoration efforts.

Jeannie was a great host, and before the tour was over she reminded us of the importance of doing something with the information that we had learned. “Now that you know what has happened to Lake Apopka, go out and tell people about it.”

As a member of YAYA-NFWM and as an ally of the greater farm worker movement, I commit to spreading the word about the atrocities that are taking place in Lake Apopka.

Thank you, Jeannie and the Farm Worker Association of Florida for giving YAYA members an opportunity to learn about another vital piece in the history of the farm worker struggle.