Forward with your Promise Immigration Rally 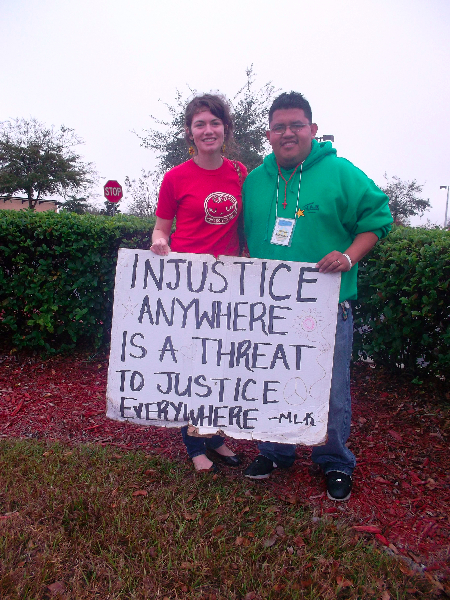 On Thursday, January 4, caravaners gathered in Clermont, FL to kick off an inspirational journey to Washington, D.C. to demand that President Obama fulfill his promise this year to sign a Comprehensive Immigration Reform into law.

A group from Sebring, FL began the caravan last September, traveling part of the path to D.C. every week on their knees to push for immigration reform. Now, several farmworker groups are coming together for the caravan, including the Centro Campesino of Auburndale, FL and the Farmworker Association of Florida.

The caravan has also become a way to honor the life and work of young activist Isabel Barajas-Martinez, who founded the group Young American Dreamers to push for immigration reform and support immigrant youth. Isabel passed away last June, but her spirit continues with everyone who is in this fight.

About 100 farmworkers, youth, and community members from all over the state were there to support the kickoff, in addition to those who will travel to Washington, D.C.

After marching 2 miles in Clermont, we traveled to Orlando, where the group held a press conference outside City Hall and marched to Senator Rubio’s office in Orlando. There, caravan participants met with the Senator’s staff and we chanted our demand of immigration reform outside the office. They day continued at the Farmworker Association of Florida office in Apopka for a community gathering.

The caravan kickoff reminded me why I became involved in the farmworker movement in the first place. Hilario Barajas of the Centro Campesino said, “We are demanding a complete reform, no piecemeal solution. We are demanding reform for all immigrants, for the father who goes out to work in the fields, for the mother working in the hospitality industry, and for the child who is studying.” It was wonderful to see the passion of everyone who was there. It is long past time for our government to recognize the contributions of immigrants and end the hypocrisy of a country that depends on undocumented immigrants for labor, yet denies them their human and civil rights.

Please visit the Forward with your Promise Caravan website to watch the inspiring speech that caravan participant Daniel Barajas gave at City Hall and to print and mail the petition that the caravan participants will by presenting to President Obama and our legislative leaders. Petitions must be postmarked by Monday, January 14.