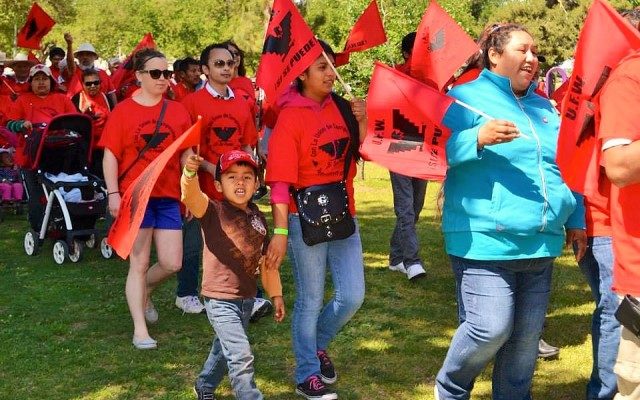 Decertification leader Sylvia Lopez’s anti-union role began before starting work at Gerawan in June 2013; complaint details that she missed 75 percent of work over the next four months without penalty in company-spawned bid to get rid of the UFW.

In a blistering new 28-page complaint—tantamount to an indictment—the chief prosecutor for the Agricultural Labor Relations Board detailed how the UFW’s renewed attempt to negotiate a union contract with Gerawan Farming “in October 2012 sparked an intensive and ongoing campaign by Gerawan to undermine the UFW’s status as its employees bargaining representative; to turn it employees against the union; to promote decertification of the UFW; and to prevent the UFW from ever representing its employees under a collective bargaining agreement.”

The consolidated complaint, the fifth since last year, was issued on Tuesday, Sept. 9, 2014, by ALRB General Counsel Sylvia Torres Guillen, who said in a news release that, “No employee in the fields should be coerced by their employers when it comes to deciding whether union representation is best for them. The Agricultural Labor Relations Act ensures that agricultural employees can select a collective bargaining representative free from employer interference.”

The complaint specifies a long chronology of serious, multiple and repeated violations of California farm labor law that have been outlined in the four earlier complaints, three from 2013 and one issued in April 2014.

Among new allegations resulting from state investigations that are contained in the new complaint are those involving Sylvia Lopez, “leader” of the drive to decertify, or get rid, of the UFW.

By mid-July 2013, Sylvia Lopez, [other of her family members] and other employees were actively engaged in a campaign of gathering signatures to support the decertification of the UFW at Gerawan. Sylvia Lopez and other employees, including supervisory personnel, began to approach employees in Gerawan’s crews in Kerman and Reedley on a regular basis, during work hours, after work hours, and during breaks, to gather signatures to decertify the UFW. During this period, Sylvia Lopez rarely worked a full day in her crew (emphasis added). Several other employees also took significant amounts of time off to engage in decertification signature gathering during work hours.

In August 2013, owner Dan Gerawan called Sylvia Lopez [and other] employees engaged in the decertification signature gathering effort and invited them to join him on a trip to Sacramento to lobby state legislators over SB 25—a bill that would have amended the Act and, in Dan Gerawan’s view, made it more difficult for agricultural employees to decertify their union…

“Gerawan supported protest activities to decertify the UFW,” the complaint alleges. It continues:

On October 25, 2013, Gerawan provided support to a media event in support of the decertification petition…encourag[ing] several hundred workers to leave work in the middle of the day to attend a protest in Fresno. Upon their return to work, Gerawan paid for the workers who participated in the protest to receive free pizza and tacos…

On multiple days, including, but not limited to, September 27, 2013, September 30, 2013, October 2, 2013, October 25, 2013, and November 1, 2013, Gerawan employees, with direction and support from Gerawan and its supervisors, stopped work and engaged in anti-UFW and anti-ALRB protests for the purpose of gathering signatures on the decertification petition and gaining support among employees, the public and state government officials for decertification (emphasis added).”

“During the course of the decertification signature gathering effort from approximately July 20, 2013 through November 1, 2013, Gerawan, through its owners, supervisors, and crew bosses, regularly made statements that encouraged and assisted in the effort to decertify the union and coerced employees in their ability to choose whether to support decertification,” the complaint states. It continues:

Gerawan discriminatorily used attendance policies to support decertification…[from July 1, 2013 through October 25, 2013]. Gerawan, through its owners, managers, supervisors and crew bosses, regularly allowed employees supporting the decertification effort to arrive late to work, leave early, access Gerawan fields on days the employee did not work, take extended breaks during the work day, and to avoid work altogether to engage in signature gathering, protests and other activities in furtherance of the decertification effort (emphasis added).

[Meantime,] during the period of Gerawan’s negotiations with the UFW in 2013 and during the period of July 2013 through October 25, 2013, Gerawan applied strict attendance policies for union supporters and for employees whose absences were unrelated to decertification activities (emphasis added).

For more information on the Gerawan Campaign, visit www.ufw.org.