Farm workers are some of the most oppressed workers in the United States. In some cases, they are subject to physical and psychological abuse in the fields. In the worst and most extreme cases, they live in conditions constituting modern-day slavery.

The United States formally abolished slavery through the Thirteenth Amendment in 1865, but nearly 150 years later, workers are still enslaved. Part of this can be attributed to “loopholes” in the abolition of slavery. The Thirteenth Amendment still allows slave labor as a penal punishment. Black people, included those who were pre-Emancipation slaves, were sentenced to long periods of labor for trumped up charges until the mid-20th century. In some cases, plantations were directly converted into prison farms, as with Caledonia State Prison Farm.

Farm workers of all races still suffer from the enduring legacy of slavery and racism in America. Even though Civil Rights reforms have ended the prison farming practices, reliance on trapped workers to turn a bigger profit continues for the agricultural industry.

These three terms differ from each other, though they are intertwined. Smuggling refers to the facilitation of the entry of a person into a place of which they are not a citizen, resident, or authorized visitor in order to obtain financial or other material benefit.  In cases of human trafficking, victims experience a loss of freedom and are transported by traffickers, who buy and sell them in pursuit of profit. If a victim of smuggling or human trafficking is forced into labor and/or sexual exploitation, it can become a case of modern-day slavery. Slavery is working against your will with little or no pay under the threat of violence or other punishment. 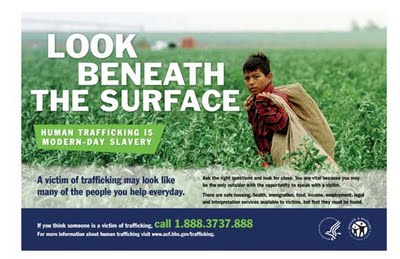 Sometimes, undocumented migrants may find that the smugglers who help them across the border have “hidden fees” that they are required to work off. Other migrants may discover that their employer charges artificially high prices for housing, food, and other basic necessities, keeping them in a perpetual cycle of debt from which there is no ability to leave.

Prosecution of these cases as slavery can be difficult. In United States v. Kozminski (1988), the Supreme Court ruled that psychological coercion is not a form of enslavement. So, threatening to call the police or ICE to have migrants deported unless they work for free may not legally count as slavery. Complications like this has led to several high-profile cases of slavery being dismissed.

In one of the largest cases of human trafficking in the country (U.S. vs. Orian) it was alleged that more than 1,100 Thai workers were brought to the United States through the H-2A guest-worker visa program and then forced to work under horrific conditions. In some cases, workers were allegedly stripped of their passports and kept under 24-hour guarded surveillance while living in rat and insect-infested housing. These workers each paid $8,000 to $20,000 to recruiters for their jobs, taking out loans, and using their ancestral land as collateral and were told that they would be sent back home if they complained about their pay or working conditions. Despite three of the defendants’ guilty pleas, federal prosecutors dropped all charges one month prior to the trial. The Criminal Section of the U.S. Department of Justice Civil Rights Division felt they could not prove, beyond a reasonable doubt, the case against Global Horizons Manpower Company, and its CEO Mordechai Orian, (The New York Times). Armed with four years of investigation and evidence from interviews with Thai farm workers, the Thai Community Development Center in L.A. continues to seek justice for these workers.

“The dismissal of the largest human trafficking case in U.S. history comes on the 17th anniversary of the famed El Monte Thai Garment Slavery Case, considered the first case of modern-day slavery in the U.S. However, instead of moving forward to combat labor trafficking and prosecute its perpetrators, the Justice Department has sent a signal to all traffickers that they have nothing to fear if they go through the motions of obtaining a temporary visa [H2A]”. – Chanchanit Martorel, Thai CDC Executive Director.

It may be comforting to imagine that slavery is rare in the United States, but over 400,000 people residing in this country live as slaves. While many cases of slavery may not be discovered and prosecuted, there have been a few high-profile investigations in recent years. In Operation Blooming Onion, the Department of Justice discovered that over 500 H-2A onion farm workers in Georgia had been coerced into forced labor. The conditions of the worker camp were horrific. Two farm workers died, and the perpetrators of these crimes regularly abused the workers and their families. The enslaving “employers” made over $200,000,000 through this criminal enterprise, but it was finally ended after the investigation. In 2022, the ringleader of these horrible crimes was sentenced to 30 years in federal prison.

A number of factors make uncovering modern-day slavery in the farm industry very difficult. Abusive farm owners usually hide workers from public view and keep tight control over the workers. Combined with language barriers and a fear of law enforcement, discovery and prosecution of these crimes may only be possible through investigations like Operation Blooming Onion.

These cases speak to many inadequacies and injustices in our society. Immigration policies that keep immigrants isolated and in fear of reporting abuses, a guest worker program with a drastic lack of oversight, and the need for cheap labor are all factors that foster  environments where slavery can exist. The legacy of racism in the United States can be seen in punitive and xenophobic laws against immigrants, an inept justice system, and exclusion of farm workers from labor protection standards that had been won in the early 20th century.

Slavery remains a lucrative business. Until we have an agricultural industry and government policies that encourage human rights over profits, we must continue the fight against slavery that began 400 years ago until slavery itself is truly abolished.