Farm workers live in many different types of housing which vary widely based on geographic location, immigration status, and other factors. The most common types of farm worker housing are:

In the case of grower-owned and other privately-owned housing, the owner can have a monopoly on available housing which allows them to overcharge. This is especially true in isolated rural areas where other housing options simply do not exist, and workers have no alternative but to pay these rates.

Because it is so expensive, many workers or families will pack into one house, trailer, or apartment in order to afford rent. A high ratio of farm workers to available utilities leads to health and sanitation complications. Far too many people share cooking and laundry facilities, sinks, bathrooms, and showers. The lack of hygiene facilities can promote pesticide exposure and the spread of disease. It is important for a worker who has been exposed to pesticides to be able to shower and wash their clothes, but with so many people living in one building, this can be difficult.

In other places, landowners charge rent fees on a per-person basis instead of a total for the building. These per-person rates make life even more difficult for farm worker families, who have to pay separately for each child. In general, lack of government oversight on housing standards and regulations enables growers and other private owners to get away with providing substandard housing.

Where population density and housing costs are high, such as in California, farm worker families migrating for work have resorted to living in tents, abandoned buildings, tool sheds, converted school buses, caves, and chicken coops. 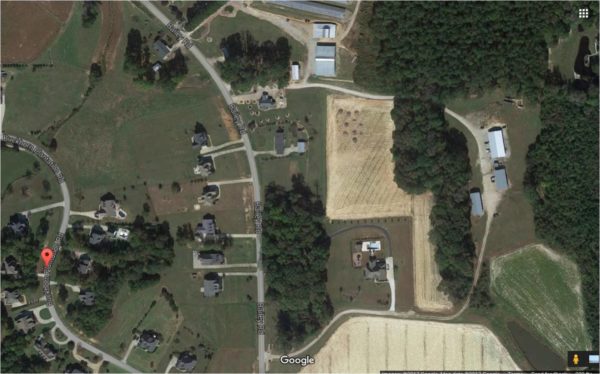 A 2015 study found that crowding, lack of access to sufficient bathing facilities, pest infestation, and structural damage are common to dwellings in farmworker labor camps. The study also found that more than one third (37.8%) of the farm worker labor camps were hidden from public view. This makes the residents even more vulnerable and making the providers of substandard housing less accountable to the public.

Photo Note: Labor Camp on right behind trees; housing development on left across the road – near Wilson, NC

Some active state legislation has attempted to improve housing conditions with limited success. For instance, the regulations contained in the North Carolina Migrant Housing Act are lax, requiring only one toilet for every 15 people and one laundry tub for every 30 people.

Regulations may also be poorly enforced due to a low number of inspectors, hidden unregistered camps, and fear of reprisal for workers who report housing conditions. In 2019, eight different unregistered housing camps were discovered by NC inspectors.

Housing remains a pressing issue for farmworkers. Their dignity and health must continue to be a priority for both their allies and employers.