Children in the Fields 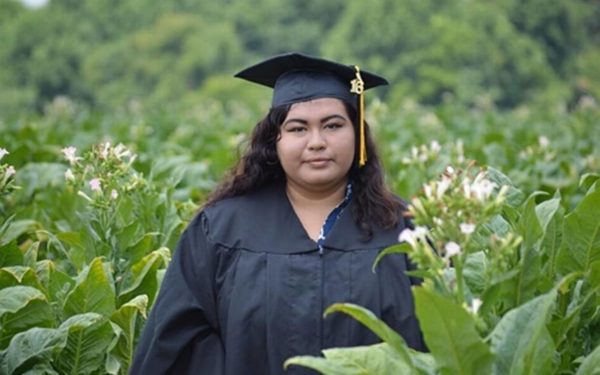 When you hear the term “farm worker”, what image comes to mind? The stereotype of a farm worker is usually an adult male. In actuality, however, hundreds of thousands of children and teens work as hired farm laborers in fields across the United States.

It’s difficult to know exactly how many there are, as precise data on youth farm workers do not exist; however, the Association of Farmworker Opportunity Programs (pdf) estimates that there are approximately 500,000 to 800,000 farm workers under the age of 18.

Additionally, many children are undocumented, and those whose parents have papers may use their parents’ social security numbers in order to work off the record. Still, there are many things we do know about children working in the fields.

For one thing, children in agriculture are the least protected by law compared to other sectors. Since 1938, federal labor laws have excluded child farm workers from labor protections provided to other working children. For instance, unlike other occupations, children twelve and younger (with a special waver) can legally work in agriculture. 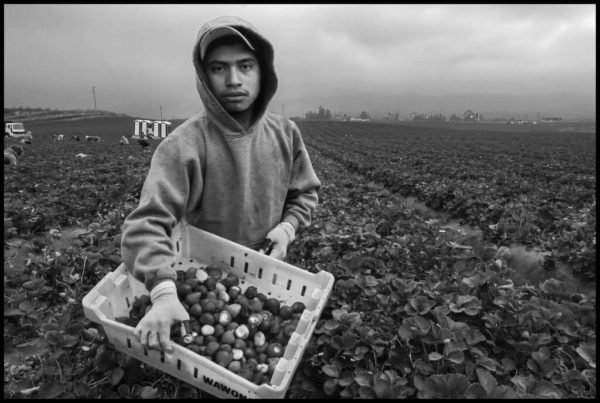 The following are the Department of Labor’s (pdf) standards for children working in the fields:

There is no denying that this is a double standard. As the Association of Farmworker Opportunity Programs (AFOP) (pdf) explains: “This inequity allows youth working on farms to perform back-breaking labor for long hours and in extreme conditions at ages less than 14, when the very same law forbids children this young from working in an air conditioned office. 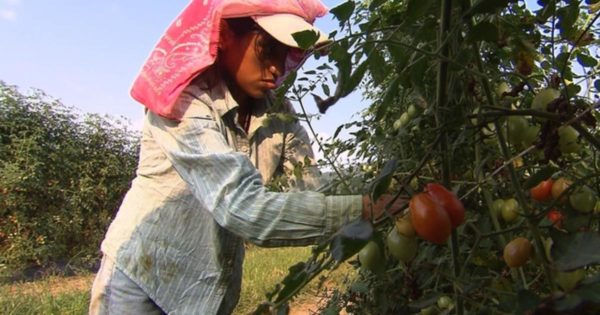 Farm work is hard work, and it is often done in extreme conditions. In addition to inadequate labor laws, children working in agriculture face exposure to dangerous weather conditions, equipment, and pesticides.

Because their bodies are still growing and they are continually developing mentally, children are even more vulnerable to the harsh conditions faced by all farm workers. According to AFOP: “Adolescents also undergo growth spurts, which may decrease flexibility and increase their susceptibility to a variety of musculoskeletal injuries, such as bursitis, tendonitis, sprains, and carpal tunnel syndrome.”

In terms of equipment, using tools designed for the muscle power of an adult can have dangerous consequences. Often times, children operate heavy equipment unsupervised and without adequate training beforehand. Operating large machinery, like tractors, has resulted in tragedy for child laborers as had children using dangerous tools like sharp knives.

Like other farm workers, children experience heat-related conditions from intense sun exposure. This includes heat exhaustion, heat stroke, dehydration, and even death. At a young age they may also be less aware of their body’s functions, and thus less able to recognize these conditions when they are occurring.

Sun is not the most hazardous thing children are exposed to, though; exposure to toxic pesticides at an early age can affect farm worker children for the rest of their lives.

In a 1995 article, Landrigan and Carlson (pdf) determined that children are “disproportionately exposed to pesticides compared with adults due to their greater intake of food, water, and air per unit of body weight.”

In addition to the physical strains of farm labor, it’s important to also recognize the psychological and emotional strain that agricultural work can have on children. In a job that is inherently unstable, some children are left to cope by themselves as they follow the harvest to earn as much as they can.

Some children migrate with their families, but some migrate alone, and this trend seems to be growing. Young people are immigrating to the U.S. by themselves in order to work and send money back home to their families. AFOP (pdf) labels this phenomenon as “an increasingly common occurrence.”

Until regulations are changed to offer more protection to children working in the fields, and unless comprehensive changes are made to our nation’s broken immigration system so that children aren’t forced to work in the fields to help their families scrape by financially, youth and young adults will continue to toil in our fields, while endangering their health and wellbeing.