Donate Now
NFWM > News > News & Archives > A YAYA Dreamer on the fight in D.C. and at UCF

A YAYA Dreamer on the fight in D.C. and at UCF 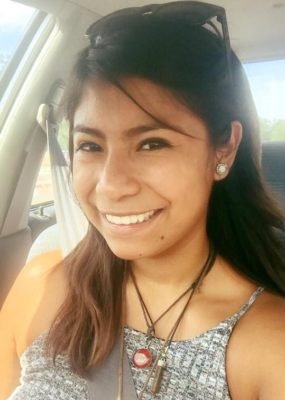 Hello, my name is Karen Caudillo and I’m a DACA student. DACA stands for Deferred Action for Childhood Arrivals. This program was set up to provide protection to children brought to this country. With DACA, students can get a social security, driver’s license, work legally and apply to college. I recently moved to Orlando, FL to attend the University of Central Florida. I’m thankful to have joined YAYA and to be their Immigration Committee Co-chair.

In the first week of September, I  joined a group of 28 DACA recipients on a four day fast on Capitol Hill through FIRM (Fair Immigration Reform Movement) and CCC (Center for Community Change).  Two of my fellow fasters who traveled with me were Ivan of the Farmworker Association of FL and Alejandra of Hope CommUnity Center.  This non-violent peaceful protest was to highlight the importance of protecting those who were brought to this country at a young age and only know this country. We didn’t eat for 4 whole days. During this experience we lobbied senators and congress members and talked to the minority party leaders. At one point, we joined the #protectDACA press conference. At the end of this conference which included senators and congress members, a reporter from the New York times started to interview me. What 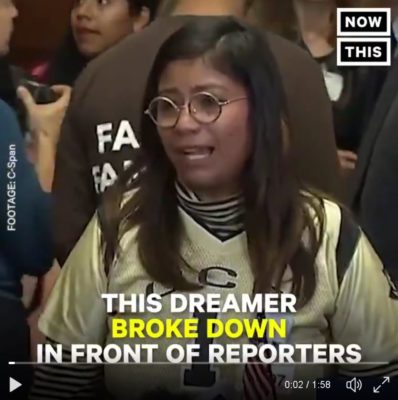 I didn’t know was that CSPAN was still recording and they recorded my very emotional interview. This interview was picked up by Now This and it went viral. I don’t regret it going viral because I feel many people had a change of heart and realized how important DACA was. It highlighted immigration issues this country is facing and how it impacts a student like me. My favorite news media The Guardian wrote a piece on “How One young Dreamer is leading the fight against Trumps DACA Rollback”. 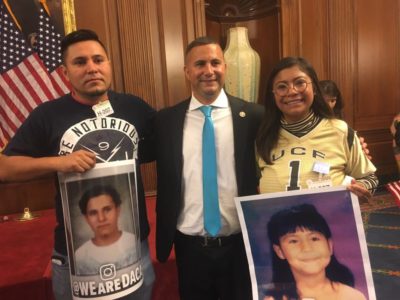 While this whole experience was indescribable and I was thankful for the support, not everything was positive. A group called 4Chann of radical (Nazi) mentality doxed and tried to intimidate me by trying to post all my personal information. Milo Yiannopoulos who reports for an extreme (Nazi) group of people with an estimated 2 million followers came after me and published all my personal information that put me and my family in danger. Out of all this, I believe that I’m on the right side of history and I fear nothing. In the following weeks, I traveled back to Washington, DC to lobby for the DREAM Act 2017. In order to help the estimated 900,000 recipients brought to this country as children, we need to push for the DREAM Act 2017. Calling the White House and your representatives would help us.

In response, the College Democrats, SLAP, YAYA and For Our Future joined forces to show the importance of standing in solidarity with DACA students who are facing a really tough time. We held a rally with Rep. Carlos Guillermo Smith and Rep. Amy Mercado who spoke as local representatives supporting our DACA students on the UCF campus. We had six University of Central Florida DACA students go on stage and tell their personal stories. YAYA helped by setting up, sharing information and with having a sign in sheet. We also had a great YAYA group turnout. About 120 people attended and at the end we marched around campus to show solidarity. This event was needed to show DACA students on campus that we are all human and we will continue to stand together. YAYA came out to show that we stood with all people affected by immigration issues. 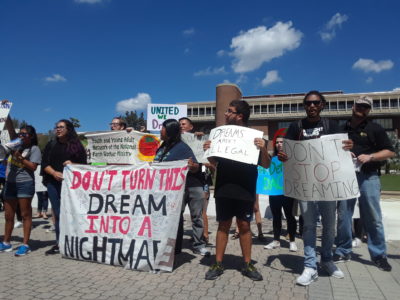 We would like to thank the groups who worked with us to set this incredible event up. We will continue to fight not just for farm workers, but with all the immigrant communities affected at this time. Together there is nothing that can divide us.