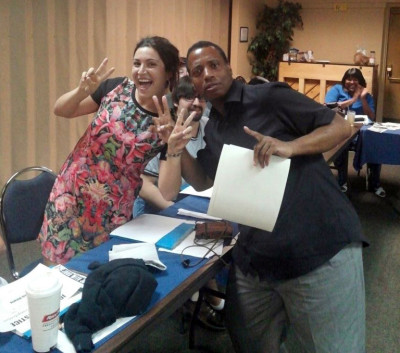 This past weekend (July 11-13), I had the opportunity to join Jobs with Justice for one of their National Leadership Trainings. Cristina Berrios and I were participants in the training and Heather Bryan helped with childcare throughout the weekend.

Jobs with Justice Leadership Trainings identify up to 30 leaders, (organizers from faith, labor, and community groups) who have been at the forefront of the social justice movement. The training provides them with the necessary skills, tactics, and strategies to win campaigns.

The training began early Friday morning at the Canterberry Retreat Center in Oviedo where people gathered for breakfast and mingled before the weekend began. Our opening exercise was based upon a role-playing scenario 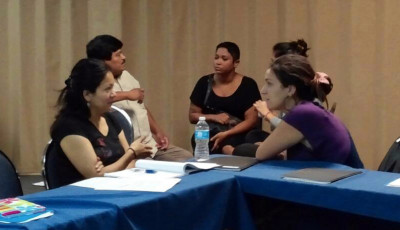 where a few people were identified as Athenians while the rest made up Melians. In this scenario Athenians were planning to conquer the island of Melia and were “kind” enough to have a dialogue with Melian leaders about them either submitting to their demands of slavery or dying at the hands of the Athenians. Knowing little about the other participants, we (the Melians) needed to act fast in order to avoid being killed by the mighty Athenians who carried a “submit or die” demeanor.

Of course, all of us Melians died because we couldn’t act quickly enough to avoid such demise. The scenario taught everyone a valuable lesson though – you cannot give up your power. All too often, in social justice movements and life, we find ourselves giving up power to the individuals, corporations, and politicians who also hold power – this was our first lesson that directed our work throughout the weekend.

After this beginning exercise, we learned some valuable tools and concepts to use in our work such as; how to create a values triangle; the difference between public and private relationships; agitation or creating a sense of urgency in individuals who you want to take part in your organization; how to hold individuals accountable; and what the corporate agenda is. These skills informed our work for the small group activities that took place on Saturday.

Saturday opened up with how to conduct effective “one-on-ones” to help you as an organizer identify people’s self-interest within your organization and at large. I really enjoyed this exercise because JwJ trainers exemplified doing one-on-ones through the image of a tree.

The tree as a whole is the individual that you wish to get to know and who may be able to help your work. The leaves on the tree represent the surface information – what we know of that person from the outside. As we move down the tree, the trunk represents the why – that individual’s values. Lastly, the roots – the stories that they wish to share as to why they are involved in social justice work – are the core of building foundational relationships that get to that individual’s experience. Breaking the tree into three parts allows one to become closer to that individual’s values and experiences.

All throughout Saturday, we did small group activities that built upon each other. We started with defining an issue and taking action. We learned the difference between a problem and an issue, and then learned how to create an issue cut. For example, in the farm worker movement, we could say the war on immigrants is a problem and from that, our issue could be that farm workers need a union to improve their working conditions. Drawing on that, our issue cut could go something like this: “Tell Reynolds American to better the lives of tobacco workers by signing the FLOC agreement outlining collective bargaining and freedom of association!”

Our last activity on Saturday dealt with the steps needed for a power analysis on your opposition and/or target within your campaign. It is important that in doing a power analysis you know who your target is, what relationships they have and with whom, and where their sources of money come from.

Then came Sunday where we played the Campaign Game where we used all the valuable resources of JwJ’s training to develop our own strategy and tactics to win a successful campaign. Sunday was by far my favorite day because it allowed me to exemplify my understanding of the materials I had learned over the weekend. It may have also been my favorite day because I had such an amazing group who really came together on this activity to build a successful campaign! Yay teamwork!!

All in all, I really enjoyed the JwJ training and found it very valuable to my work in YAYA and with NFWM. Not only did I build upon the skills I have learned over the years, but I also learned valuable lessons regarding my leadership. I learned more about building an effective (and winnable) strategy and was left with the burning desire to learn more and to win more. The leadership training is most definitely valuable to NFWM-YAYA in that it helped solidify some necessary elements to defining and building leadership and power within our communities.

Thank you Central Florida Jobs with Justice for providing Cristina and I scholarships to attend! Much gratitude to all the trainers and leaders in Central Florida who made this training amazing in so many ways!