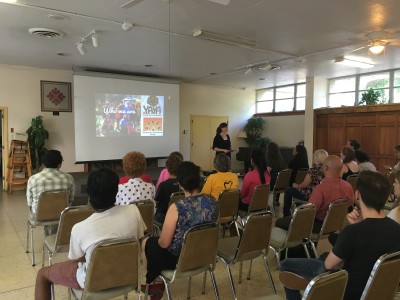 On Thursday, March 31st, YAYA –NFWM and the Farmworker Association of Florida (FWAF) hosted a Climate & Agricultural Panel at 1st Unitarian Church for National Farmworker Awareness Week (NFAW. There were 6 folks on the panel who spoke about different aspects of climate change and how agriculture plays into that. It was also centered on the ways in which climate change is affecting farm workers.

The panel began with an introduction to what climate change is and the contributing factors to the changes we are seeing in the environment. The agricultural industry, including livestock, is one of the most crucial elements that play a part in climate change. Jeannie, Pesticide Director of FWAF, spoke about these issues and emphasized that the way we produce our food is leading to the deterioration of the lands we live on.

We also heard from Miguel Zelaya, FWAF member and a farmworker for over 30 years. He spoke about his experiences on different farms and the changes in weather and climate he has witnessed over the years. Miguel told us about upon his arrival in Florida he would pick oranges then migrate Michigan to pick apples. Over the years, doing any work in Florida was becoming more and more difficult as the temperatures continue to rise. Now, Miguel says, that people are still coming over from his home country to find work in the states, however, because of the climate change, sometimes there is no work or the work is unbearable. He says he is now finding the same issues he was once trying to escape. 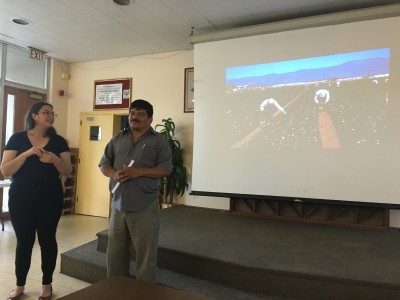 Antonio Tovar, a researcher with FWAF and employee with the Department of Health, added to this. FWAF began conducting a study, Los Girasoles, in the summer of 2015 where they are measuring heat stress on farm workers by having them wear a device that would track their body temperature throughout their workday. The maximum capacity for body temperature that a person can still function is 104 degrees Fahrenheit. Lost Girasoles’ study, so far, has shown that the majority of the farm workers had body temperatures surpassing 104, reaching up to 110 degrees. This means that not only are the changes in climate affecting the crops and the land, but also farmworkers are being asked to work and endure temperatures that can have serious adverse affects on their body.

Another speaker named Selena Zelaya spoke about the ways in which we can change the way we produce food through agroecology. Agroecology is a farming that centers on food production that makes the best use of nature’s resources while not damaging the land. She spoke about going back to the way her ancestors cultivated food and how they respected the land. She emphasized that we need to stop mass-producing our food if we want to see changes in the climate and for farm workers. Suggestions such as buying from local farms instead of big commercial products were made. One issue she brought up with big farms is that typically, they will have many fields of the same crop. If something happens in the weather or if an insect comes along that affects these crops and thus damages them, then there is nothing to make money from because all of the crops are the same. Selena suggested that the way her ancestors did it was buy planting different crops in the same area. This way, if one crop gets damaged, there is still a chance a different crop is still okay and therefore one can eat and have produce to sell.

Nico Gumbs, YAYA coordinator, spoke about racism and how farm workers deal with prejudice and discrimination. Farm workers are still excluded from basic human and worker rights such as the right to a minimum wage, overtime pay and, the right to unionize. In addition to this, children as young as 12 are allowed to work in the fields in dangerous conditions and the majority of farm workers are paid by how much the pick not how long the work, this is called piece rate. 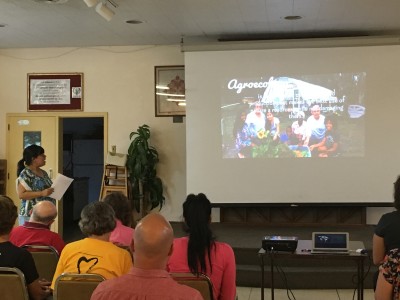 Overall, I think the panel was a success. There was a great turnout of different folks of all ages ready to talk about the ways in which climate change affects the land and those who work so closely to it. I think this was a really important conversation to have because although we hear so much about climate change and global warming, we don’t hear very often how this affects farm workers. I’m thankful for the hard work put into this panel and I hope we continue to have dialogues like this.