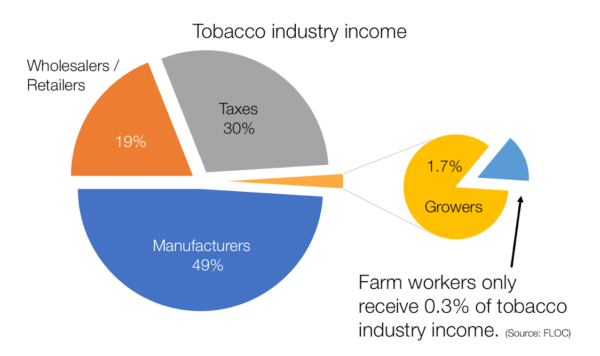 Farm worker earnings are difficult to generalize. Many factors play into how much a farm worker is paid. The average farm worker family earns a total of $25,000 to $29,999 per year, which includes both farm labor and any other source of income. Less than ½ of farm workers have health insurance, and 20% of them live below the poverty line. However, an average number cannot describe the different factors that affect income.

Many factors such as immigration status and indigenous heritage can place workers at a particularly high risk of poverty. For instance, one survey found that the yearly income of indigenous farm workers was only about 61% of what non-indigenous workers made. Undocumented migrant farm worker families are also more than twice as likely to live below the poverty line.

Many farm workers are paid based how many buckets or bags they pick of whatever crop they harvest—this is known as the “piece rate.” For instance, the piece rate for sweet potatoes in North Carolina is around 45 cents per 35 pound bucket. To be paid minimum wage, a worker must pick 635 pounds of sweet potatoes per hour.

This way of payment has significant drawbacks. It discourages breaks for water or shade, as taking breaks would cut into their productivity and cut into their pay. Additionally, it is possible for a farm worker being paid by piece rate to make less than the minimum wage, especially if growers arbitrary change how quantities of each crop are measured. Another common issue amongst farm workers is wage theft, in which a portion of a worker’s wage is stolen by their employer or supervisor.

To compensate for this problem, federal law (Fair Labor Standards Act) requires employers on large farms to pay minimum wage if a worker doesn’t earn it based on the piece rate. Unfortunately, there are loopholes to this system: about one-third of the nation’s farm workers work on small farms, and these are not subject to federal law surrounding minimum wage.

Even when regulations exist, oversight is lax. At the end of the day, a law is only as strong as its enforcement. In the case of workers in our country’s fields, labor laws are poorly enforced at best, and at worst, farm workers are paid very little or no wages and are working under modern-day slavery conditions.

Other factors besides low wages also contribute to farm worker poverty. Many workers are day laborers, and migrant farm workers must chase crops to make a living. Farm workers are also constantly at the mercy of variable conditions like natural disasters and bad weather.

Finally, in addition to low wages and a lack of job security, most farm workers lack benefits that labor laws guarantee to workers in other industries. For instance, most do not receive overtime pay, nor do they get sick time or maternity leave.

Still, there is some hope for improvement: despite living in poverty and lacking enforcement of the laws that do exist, farm workers are organizing to improve these conditions. Check out our Current Campaigns to learn more about how farm workers across the country are banning together and demanding a fair wage for their hard work, and how NFWM and allies are supporting them in this struggle.