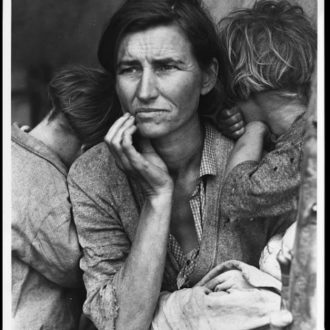 The Great Depression and the Dust Bowl (a period of drought that destroyed millions of acres of farmland) forced white farmers to sell their farms and become migrant workers who traveled from farm to farm to pick fruit and other crops at starvation wages.1

Due to the lack of jobs during the Great Depression, more than 500,000 Mexican Americans were deported or pressured to leave during the Mexican Repatriation, and the number of farm workers of Mexican descent decreased.2

The U.S. government passed a series of labor laws to protect workers, but excluded farm workers and domestic laborers. In 1935 the National Labor Relations Act (NLRA) provided the right to organize without retaliation, but excluded farm workers and domestic workers.3 The 1938 Fair Labor Standards Act (FLSA) created overtime rules and established the minimum wage which did not cover seasonal workers.4 The FLSA also failed to include youth farm workers in its standards for youth laborers.

Farm workers were excluded from labor laws in the 1930s, and they are still excluded from most basic labor protections available to workers in other industries. One of those exemptions creates a system for child labor to be prevalent within agriculture. But we can make changes to help improve the living and working conditions for farm worker families. Learn more about issues affecting farm workers today.