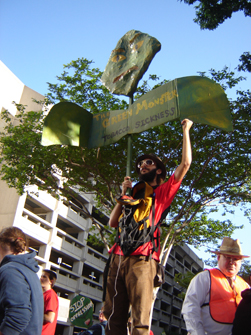 In support of FLOCs campaign to bring justice to the Tobacco fields, some Florida and Georgia YAYAs traveled to the RJ Reynolds shareholder meeting protest in Winston Salem, North Carolina.

Once in NC they joined local supporters the night before to make banners and signs and to get ready for the protest.

The protest started at 8 am. At this time volunteers distributed alternative shareholder proposals to meeting attendees.

The creative banners (like this one made by supporters in St Augustine, Florida) were displayed in front of the RJ Reynolds building.

We were inspired by local leaders who spoke about the conditions in the fields of NC.

About 150 people attended the protest.

Even though we had a permit, the police did not allow us to have music or bullhorns… but we knew of other ways in which we could get our message across.

Inside, supporters and FLOC representatives presented a shareholder resolution calling on the company to respect workers’ rights.

For more information about FLOC and the RJ Reynolds Campaign and how you can take action, visit the following links:
– FLOC’s Web site
– Article in the Socialist Worker