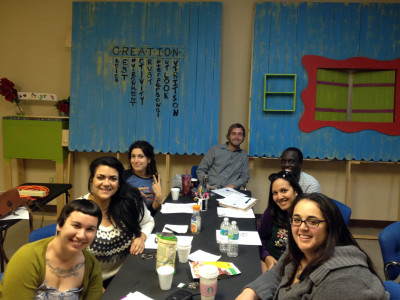 On Sunday, April 13, I took part in the YAYA Organizing Training. The YAYA Organizing Training is a series of different workshops and interactive sessions that we in the organization use to build our skills as leaders and supporters of the farm worker movement. As a central theme to organizing people in social justice: all leaders are trained. Even those that have years of expertise in activism attend every training they can be a part of. The reason why we do this is because every organization has different methods and ways of organizing. To really be able to move people of all identities, its important to learn the strategies that work within different social justice movements.

I was not alone. With me were many great YAYA members including: Bianka, Melissa, Heather, Cristina, Sandra, Eric, and of course the fearless coordinator, Nico. It was an all day event but for me, it didn’t feel like a day in the cubicle, waiting for the time to go by. For myself it was a particularly interesting journey. I had rushed to the training lacking the suggested 8 hour sleep break, and thought I wasn’t going to make it. Luckily, we’re a group of folks who don’t judge those who wear sweatpants and a tee to a training.

The key to trainings is the bond that is created through numerous hours together in one building. We had some serious discussions involving inclusivity and communication, but it wasn’t in anger or malice. It was constructive and we were able to move forward with plans that will help us in the future. We also talked about our relationship with other organizations and moving together as one. Of course the importance of these trainings is to learn about each other individually. Many times in an organization, we are close because of the work that we do, but we’re not close to each other when that switch is off. Not only was I able to grow closer to newer YAYAs but they in turn grew closer to me. I know how people are involved in this farmworker movement and now I also know who is a major Mad Men fan like myself.

I’ve been involved in many different trainings since I was involved in activism. Each one is different, and each one I learned a lot more about myself and the people around me. The YAYA training is particularly special to me because we’re diverse in so many ways. In knowing one another, we left with smiles on our faces, realizing that although we have many different things going on with our lives, for that eight-hour block, we achieved something.