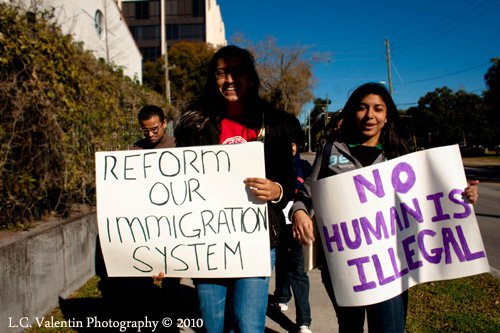 On February 23, 2010, Orlando and Deland YAYA members organized presentations in their communities to talk about immigration reform and how lack of documentation affects the lives of immigrants in Florida.

Deland YAYAs organized their presentation at Stetson University, where YAYA members spoke about how lack of documents affects them, their families and their friends. Ana Bolanos, President of the Alliance of Active Women was also a speaker. She talked about raids and undocumented farm workers. The last part of the presentation was to inform people about AgJOBS and the DREAM Act and people can take action.

At the event, Matt Garcia and Juan Barredo gave a presentation on the urgency of immigration reform, focusing on the situation of young people in farm worker families. The chapter screened the short film “Children In the Fields”, and new and old members joined in a discussion on the importance of supporting farm worker youth who often face both farm worker poverty and lack of immigration status as obstacles to education. 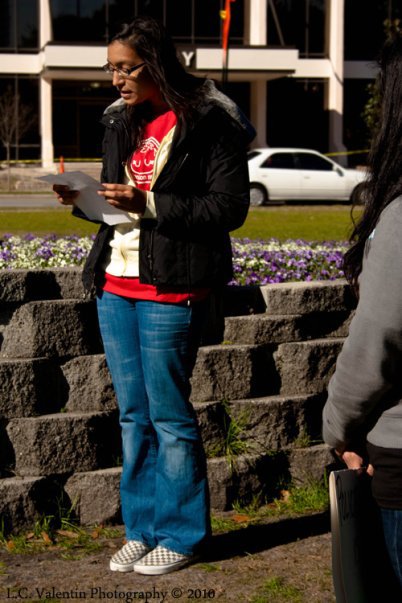 Following the event, on February 26, Orlando YAYA member Nicole Godreau gave a presentation on lack of access to higher education for farm worker youth. This is an excerpt of her speech:

Many of the young people depending on the Comprehensive Immigration Reform come from farm worker families, and many of them are farm workers themselves. The majority of farm workers in America are young adults who share our dreams and goals of going to school and having decent working and living conditions. These dreams are often shattered by a system that keeps farm workers and their families oppressed, in poverty and without access to education.

Undocumented young people from farm worker families who graduate high school have limited options after graduation and often end up working in the fields or other low-paying jobs. Without access to financial aid and already making below poverty wages -an average of $11,000 per year- it is a necessity to work and it is almost impossible to make it to college.
Many young people from farm worker families never graduate high school because they have to go to the fields to help their families bring food to the table or because without access to higher education, they lose hope of making a better life after high school and decide to work instead. Dropping out of school to work in the fields is encouraged by a system that does not limit the number of hours per day that a child works in agriculture. In all other occupations, children under seventeen are limited to three hours of work per day when school is in session.

Approximately only 55% of farm worker children graduate from high school and the drop out rate for farm worker youth is 45 percent, compared to 29 per cent in the non-farm worker population. For young people who migrate with their families from state to state picking crops the situation is even worse. It is estimated that only 10 per cent of migrant farm workers finish high school.

In 2003, it was estimated that over 70% of migrant farm workers had not completed high school, and 75% were functionally illiterate. As we know, inadequate education limits the potential of better jobs for farm workers and their families and contributes to the system of oppression of which they are victims.

It is our hope that working and living conditions for farm workers improve so that they can make a decent life working in the fields and harvesting the food that we eat everyday. It is also our hope that members of farm worker families enjoy the right to go to college if they choose to and that they achieve their dreams.”