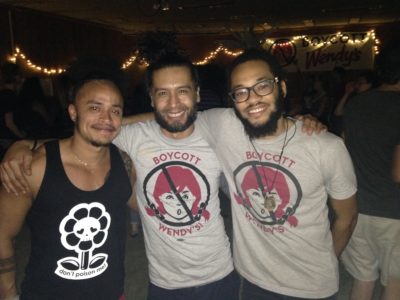 The past weekend, September 22-25, I spent the weekend in Immokalee with over 80 Fair Food allies for the first annual Boycott Summit. The Boycott Summit was focused on Wendy’s – the last of the five major fast food retailers to sign to the Fair Food Agreement – bringing together an array of individuals from all across the country. It also was the first intergenerational space among young people, families, and people of faith that the CIW has hosted. During the weekend participants engaged in interactive workshops, skill building trainings, and campaign planning exercises with one focus in mind, to create a strategy in advancing the national Wendy’s Boycott. 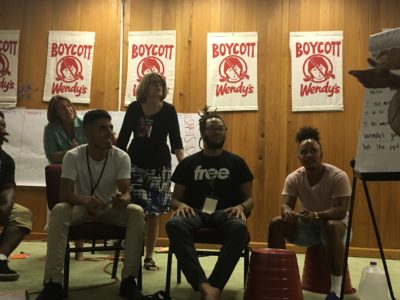 Thursday evening is when everyone gathered to hear from CIW and Alliance for Fair Food (AFF) staff about the weekend ahead. We also heard from Radio Conciencia and the Women’s group about the work they’ve been centering for Immokalee farm workers, and then had the opportunity to mingle with the group and folks specific in our familias before heading to the Beth-El Retreat center. Friday began the action-packed weekend where we heard more about the CIW’s history, the precedence in calling a Boycott of Wendy’s (not done since the Taco Bell campaign), and the important role allies and consumers have played in winning Fair Food contracts for Immokalee tomato pickers. Once we got the backdrop of the CIW, folks broke out into regional groups to discuss strategy of supporting the CIW’s “Behind the Braids” tour across the Midwest, mid-Atlantic, southeast and of course, Florida. The Florida group was made up of folks from Miami to Tallahassee discussing ways to support the tour stop in Gainesville on October 12th. Miami students planned on hosting an “echo” action in support of the tour on the following Saturday, while Central and North Florida participants split between driving to Gainesville the day of and hosting their own actions during the following weekend. After our regional session, we broke into the first of two skill-building workshops throughout the weekend. I joined the music, art, and Fair Food workshop where we discussed the importance of art and music for the CIW. We also had the time to create a chant for Saturday’s action amongst our group! I never saw myself as an art and music individual but I felt inspired after our time together. 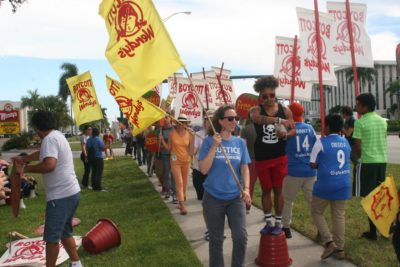 On Saturday, we broke out into regional groups again to plan for the months after October leading all the way into the major Spring action. A lot of great ideas came from the Florida group including doing another weekend action during International Human Rights Day (December 10); hosting a Posada action in which folks would go door-to-door to discuss the Fair Food campaign and the Wendy’s Boycott and possibly doing an “All I want for Christmas” social media campaign targeting Wendy’s; and a Valentines Day “Break Up with Wendy’s” social media action similar to last years. After regional strategy sessions, we jumped back into our skill-building blocks. Since I am a steering committee member of the Student/Farmworker Alliance (SFA), I co-facilitated a workshop on “Bringing the Heat to the Streets: How to Organize an Action.” I brought all my knowledge I learned from YAYA to the space and gave folks some vital resources we use here to better prepare for an action and delegate tasks to people within their group. Once we finished up our workshops, participants loaded up on a bus to Naples for the big action! It was a very visible action as over 100 people showed up to show their disdain for Wendy’s not showing corporate accountability in their supply chain. Although Wendy’s locked the doors when the letter delegation tried to speak to them, Wendy’s customers and onlookers were very supportive of our message and exemplified such through horn-honking and joining the demonstration. 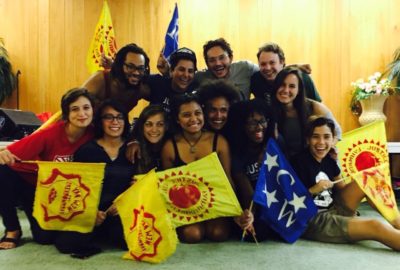 Sunday was our closing day with CIW members and allies alike as many people started leaving at 8AM to catch flights back home. We spent this day talking about the launch of the AFF’s new sustainer program to continue the work of the Fair Food Program as it expands outside of the Florida’s tomato industry and into the strawberry and pepper fields here, as well as along the east coast. We also spoke about the leadership structure of the AFF and discussed concrete ways allies can plug-in throughout the year such as, joining the SFA steering committee, internships, and volunteer opportunities. Overall the weekend was most enjoyable and a beautiful way to spend one of my last week’s with YAYA-NFWM. It reassured my commitment to the farm worker movement and how pertinent it is to have movements that create intergenerational spaces where seasoned folks and new ones alike can come together to stand in solidarity with farm workers as they fight for dignity and respect in the fields.

For more pictures from this weekend, check out the Alliance for Fair Food’s Facebook page!