Wawa Do the Right Thing! 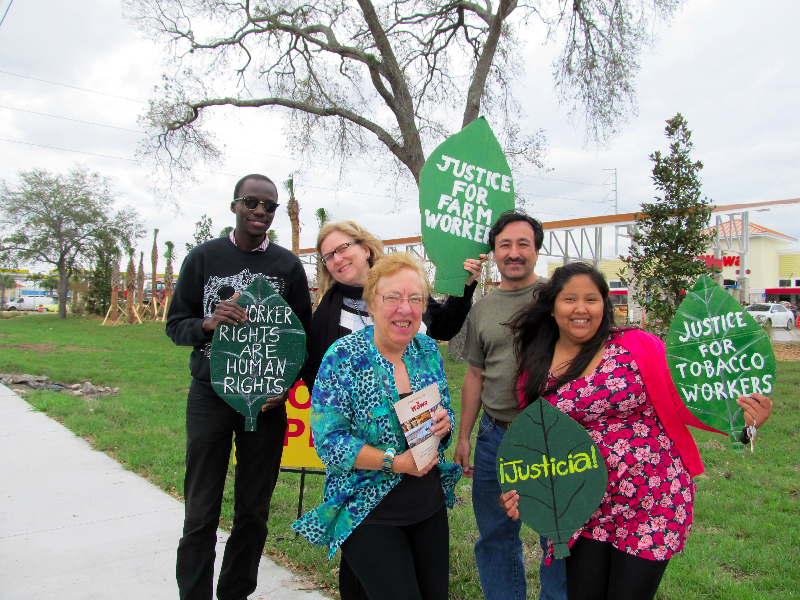 On Thursday, February 27, four YAYAs traveled to both Tampa and Largo, Florida, to put pressure on Wawa to “Do The Right Thing” and support the Farm Labor Organizing Campaign.

We left Orlando at 7:30 to start our journey to Tampa for a Wawa grand opening, the first we would attend that day. We arrived at the very beginning of the grand opening and heard the Florida Director of Operations, Todd Souders, speak about Wawa’s values and their drive to “Do The Right Thing”. After he finished speaking, the sub sandwich making contest between the Tampa Police and Tampa Fire-Fighters began. Afterwards, Cristina and I approached Todd Souders and presented him a letter asking Wawa to support the Farm Labor Organizing Committee’s campaign against R.J. Reynold’s Tobacco. Mr. Souders had heard of YAYA and what we were trying to do. He said that it was a PR issue and that this was out of his control. He still took the letter and said he would see what he could do.

After having lunch with Patricia Plantamura from the National Farm Worker’s Ministry Pinellas Support Committee (PSC), we traveled to Largo in order to attend another Wawa grand opening.

When we arrived to the event,  it was exactly the same agenda as the first grand opening that day. This time, instead of talking to Todd Souders, we approached one of the head PR members, Kristine McCarthy. She appreciated our efforts and said that she will pass the letter on to the higher ups. We informed her that we are looking for a response from Wawa about their formal stance.

Overall, I feel that our field trip to Tampa and Largo was very productive and successful. We showed corporate Wawa officials that we are serious and will continue to have actions and rallies until we get an answer in support of farm workers.

We hope that you will join our efforts by attending our next action at Wawa. It will take place on Thursday, March 27, at the Wawa located in Oviedo, 3000 Alafaya Trail. This action is part of this year’s  National of Farmworker Awareness Week. The action will consist of a rally and delivery of a letter for the District Manager, Charlene Marko-Heim, urging Wawa to take action for farm worker justice.