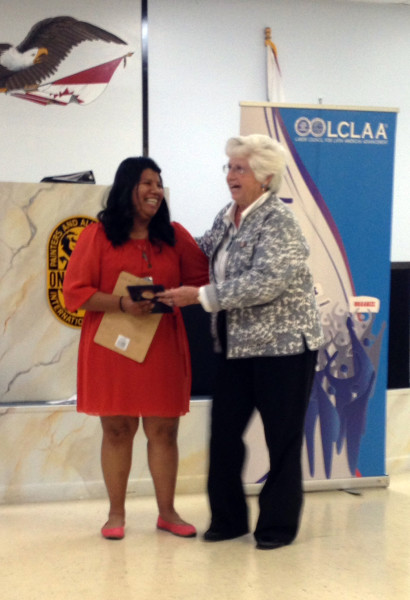 On Friday, March 28th, I along with 3 other YAYA members attended “Viva La Mujer”, an event hosted by the Labor Council for Latin American Advancement (LCLAA) to honor important women  in our community. As many of you know, March is Women’s History Month, and LCLAA celebrated it by presenting an award to two very significant women in our area – Sister Ann Kendrick of the Hope CommUnity Center, and Ana Carolina Pereira, a reporter for the Orlando Univision news station.

Ana Carolina was first to be presented with her award. She was born and raised in Venezuela and moved to the U.S. in 1998 to attend Emerson College to get her degree in Journalism. Ana joined the Orlando Univision back in 2011 and has since been an outstanding reporter, investigating news that matter to us (the community) and successfully reaching out to the Latin community about local and national issues. Ana gave a few words after receiving her award and told us that she goes to work with a smile on her face every day. Ana loves politics and has a strong passion to report meaningful news to her fellow citizens, and for that, we thank her.

Sister Ann has been a champion of farm worker rights in Central Florida and continues to be important to the movement because she uses her privilege in this society to change the hearts of some of the harshest anti-immigrant individuals. YAYA has worked closely with HCC and Sister Ann on immersion trips, theater projects, DACA clinics, and doing volunteer work.

As Sister Ann stood up to accept her award, you could see the modesty all over her face. She thanked everyone for the award, but was quick to get back to the issues at hand, which is what makes Sister Ann such an amazing woman. Even when it is her time of recognition, she utilizes that time to keep informing folks about current issues and ways we can help. Sister Ann concluded her small speech with a prayer Cesar Chavez used to recite, in both English and Spanish. I really appreciated this, as not only was it the release day of the Cesar Chavez: An American Hero movie, but hearing Sister Ann say the powerful prayer in both English and Spanish was moving.

The overarching issue which Sister Ann spoke on was the passing of immigration reform. The fight is not over and she stressed the need to work collectively to see a bill passed during the year 2014. As for the farm workers, a comprehensive immigration bill would give undocumented workers the opportunity to no longer live in fear, and this is a necessity. Everyday someone labors in the fields to provide the sustenance of our lives while they are unable to feed themselves and their families – this is why immigration reform is a must for 2014!

The night went on with a raffle give-away for Cesar Chavez: An American Hero movie tickets for that Saturday and Sunday, and concluded with a delicious meal, drinks and desert. I was thankful that I was able to attend this event, as it is extremely important to recognize those individuals who do so much for so many people on a daily basis. LCLAA’s event definitely brings light to the women in society that use their privilege to stand in solidarity with farm workers, immigrants, and undocumented folks alike.  However, let’s not forget about the women in the fields who make up 20% of the agricultural workforce and experience rampant sexual, verbal, and physical violence.  It is important to recognize these women’s value and dignity in the farm worker movement.

So thank you again to Ana Carolina Pereira and Sister Ann Kendrick for being the raw fighters, leaders and inspiration we all need.