Use Your Voice as a Citizen – Push Legislation for Farm Workers 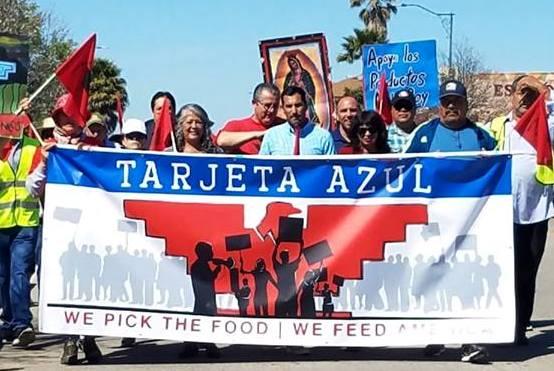 National Farm Workers Ministry continues to push for both the Agricultural Worker Program Act (“Blue Card” bill) and the Fairness for Farm Workers Act (Overtime bill) in Congress. Both are significant pieces of legislation for farm workers and for securing a stable agricultural work force and a sustainable agricultural system.

The most pressing need now is to increase the number of co-sponsors in Congress. Have you contacted your Congressional Representative? Please do so today! Letters, emails, calls, and visits all help farm workers. When you reach out, let NFWM know so we can keep track of how many times they are contacted. Send that information to jtaylor@nfwm.org More NFWM info HERE.

Farm Workers are on the Front Lines of Climate Change

How many hours or minutes a day are you in the sun? Asuncion Valdivia, a 53-year-old farm worker, died in July 2004 from heatstroke after working a 10-hour day picking grapes in the 100-degree sun. No ambulance responded because employees were unable to provide the vineyard’s location. Asuncion died in the car as his son tried frantically to reach a hospital. Summer heat is bearing down on us with temperatures reaching in the triple figures.

This week, a bill titled the “Asuncion Valdivia Heat Illness and Fatality Prevention Act” (HR3668) was introduced to require the Occupational Safety and Health Administration (OSHA) to implement a national heat stress standard.

Soaring temperatures endanger thousands of farm workers and warehouse workers who work in unventilated locations. Heat illness can be prevented by access to training, water, shade and rest breaks. But many employers won’t provide these basic needs voluntarily, so federal legislation is needed.

Take action!  Send an e-mail today or write a letter, and/or call to ask your Congressional representatives to support this vital bill.