On August 3rd, farm workers will launch a 24-day, 335-mile “March for the Governor’s Signature” from the UFW’s historic Delano CA 40 Acres. They will arrive on August 26th at the state Capitol in Sacramento.

Farm workers are marching to convince Gov. Gavin Newsom to sign AB 2183, the Agricultural Labor Relations Voting Choice Act (AB 2183-Stone). The bill would give more choices to farm workers so they can vote free from grower intimidation in union elections. Farm workers would be able to vote in secret whenever and wherever they feel safe.

The route for this march or peregrinacion (pilgrimage) of sacrifice will go through 24 valley cities and towns. Marchers will start around 7 a.m. each day and will be marching an average of 14 miles each day in the extreme summer heat.

Sign up today with the UFW, if you or your faith group is interested in participating in this to march alongside farm workers. The UFW is hoping for the biggest supporter turnout in Sacramento on the 26th. Buses are being coordinated to help with this and to lead caravans from the cities along the march route. Contact Leslie Uribe at luribe@ufw.org and Antonio Cortes antonioc@ufw.org if you live near the march route and you want to fill the buses and support farm workers on the final day of the march.

We are looking for people who can provide support services, such as food and organizing residential help, for the farm workers along the way, particularly in Lindsay on Aug.7 and Turlock on Aug. 18. Please contact jtaylor@nfwm.org for more information or to let us know you can help.

Not in California? Help us uplift the march and raise awareness about the experiences of farm workers on social media. Follow along with NFWM and share our content during the march and beyond. 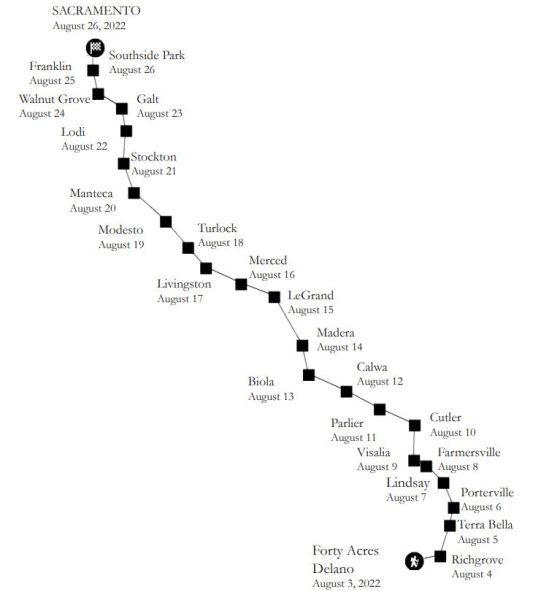