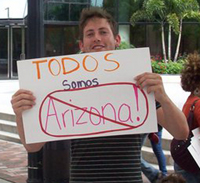 “Several community organizations came together on May 29 to speak out against the anti-immigrant Arizona law SB 1070, and to hold our local officials accountable for implementing anti-immigrant policies in Orange County. We held a lively rally of fifty people, with coverage by two local news channels.

We felt it was very important to stand in solidarity with immigrants and victims of racial profiling in Arizona, especially in a time when so many farm workers here are also living in fear of police collaboration with immigration enforcement.

Our organizations included the Orlando YAYA Chapter, National Farm Worker Ministry, Central Florida Jobs with Justice, Central Florida’s Labor Council for Latin American Advancement, and Organize Now! Several speakers gave voice to the stories of local farm workers and immigrants who are affected by racist enforcement policies, and called upon everyone in the community to fight back in a time when human and civil rights are under attack.

We are grateful to all of the old and new allies who joined us at the rally to stand in solidarity with farm workers and the victims of racial profiling of Arizona.” 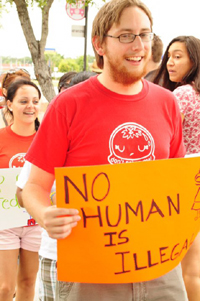 “This rally started off small, but by the end there were 50 people that came out to support this day as a national day of action with Arizona against SB1070. There were a couple of camera crews from local news channels filming our chanting and speeches. This rally made me realize that all movements have to start somewhere, and if next time we commit for each person to bring one friend, we could double the turnout. I’m so thankful to know such dedicated people that fight for human rights on a daily basis.”