Thanksgiving action in support of the CIW 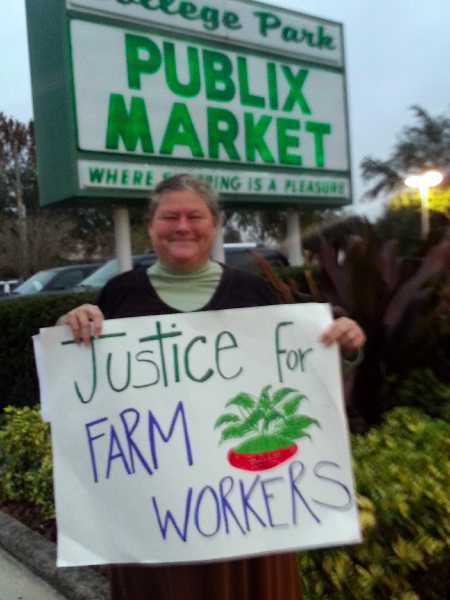 On November 19th, 2012, twenty Orlando YAYA members and community allies got together for a demonstration during the Coalition of Immokalee Worker’s (CIW) Week of Supermarket Action on the Publix Supermarket in College Park.

The CIW targeted Publix as part of the Fair Food Campaign, established in 2001. The campaign seeks to raise the pay of farm workers by providing an additional 1 cent per pound of tomatoes picked. This cent would be provided by fast-food restaurants and grocery chains and passed down to the growers so that they would in turn pay the workers. The participating corporations agree to only purchase tomatoes from growers who participate in the program and who improve the working conditions of the workers.

The raise has the potential to dramatically increase the criminally low wages currently offered to farmworkers from the current $10 thousand a year to a more reasonable $16 to $17 thousand a year. Unfortunately, despite the many victories of the CIW to promote the Fair Food Campaign, including (but not limited to) Taco Bell, Burger King, Yum Brands, Trader Joes and recently Chipotle; Publix has stonewalled the CIW for nearly three years.

YAYAs thanksgiving action in support of the CIW was part of a multi-state effort to place increased pressure on Publix as it entered the busiest grocery week of the year.

YAYA members picketed outside of the entrance to Publix, chanting slogans in support of farmworkers and passing informational brochures to passersby. A small delegation of YAYA members entered the store to present a list of demands on behalf of the farmworkers. Despite the avid attention of several managers and about two or three police officers, the event was relatively non-confrontational. Management appeared to be already aware of the demands and not particularly receptive. An interesting and potentially useful development was the interest of Publix workers in the demonstration. At least two workers came forward to the demonstration to ask for more information.

Members of the CIW were expected to turn out to join the picket, but unfortunately the traveling delegation of farmworkers experienced travel related problems and were unable to make it to the event at the scheduled time. Even with this setback the event still went forward as planned. A farmworker presence would have undoubtedly been a major improvement, but the event was still successful in maintaining a presence and rallying public support against Publix’s miserly intransigence.