Taking action in support of FLOC 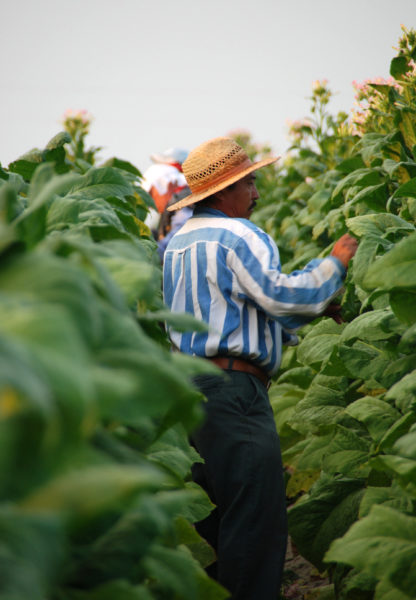 Throughout the month of October, Orlando YAYA has been busy working in solidarity with the Farm Labor Organizing Committee (FLOC) and their campaign to pressure tobacco giant RJ Reynolds to take responsibility for the working conditions for tobacco farm workers.

Like the previous letter drops at the Kangaroo gas stations, YAYA has been welcoming all the new Wawa stores to Central Florida with letters detailing the mistreatment of tobacco farm workers who are employed by RJ Reynolds. As a part of these actions, we called each store a week in advance to announce our arrival. We also contacted the regional manager, Ms. Charlene Marko-Heim, to come out to the letter drops so we could meet with her personally and discuss our intentions.

The first letter drop took place Monday, October 1st. Two YAYA members arrived at the Goldenrod Wawa location to deliver the first letter to the general manager. After introducing ourselves and what YAYA works towards, we briefly summarized the contents of the letter and the reason for our visit: to make Wawa aware of the gross mistreatment of tobacco workers and urge them to pressure RJ Reynolds to meet with FLOC and draw up a written agreement that establishes freedom of association and collective bargaining rights for farm workers. Unfortunately, the regional manager was not at the store so we urged the general manager to pass this letter up the Wawa chain of command to Ms. Marko-Heim to let her know that YAYA and the consumers of Central Florida will not stand for the mistreatment of farm workers and that they need to do their part in urging RJ Reynolds to meet with FLOC. To our delight, the general manager was very interested in our cause and very willing to pass the letter along to Ms. Marko-Heim.

The second letter drop on October 9th was very similar to the first. Two delegates for Orlando YAYA arrived at the North Orange Blossom Trail Wawa location and met with the general manager. We were hoping that the Charlene Marko-Heim would be at this location, but we were informed that she would not be coming by today. YAYA continued to talk to the general manager and after expressing our concerns, she informed us that she was aware of how RJ Reynolds mistreats migrant farm workers and told us that she would inform Ms. Marko-Heim about the letter.

Three YAYA members arrived at the Silver Star Wawa location on October 10th. When YAYA members called the store to inform them of our arrival and the purpose for our visit, we were met with opposition. We were told that we were not allowed to come to the store to deliver the letter. Despite empty threats of potentially getting kicked out of the store, three YAYAs went anyway. When we arrived at the store, we asked to see the general manager, but ended up talking to an assistant manager about our campaign with FLOC. We were also informed that, once again, that Charlene Marko-Heim would not be at this location today. After discussing farm worker issues with the manager at hand and telling him to send the letter to the regional manager, he agreed to do so.

On October 23, Orlando YAYA sent a small delegation to the WAWA corporate office to visit Charlene Marko-Heim. After delivering several letters addressing the problem of profiting off of the backs of migrant farm workers in North Carolina throughout the month, we were pushed to the point to speak to the person with power face to face. This was also a culmination of the several calls, voice messages, and emails we had sent to the district manager, expressing that we want to meet with them, as members of the community of Orlando, to talk about the injustices that farm workers that pick tobacco in North Carolina face. Unfortunately, after all the inquiries into meeting with Charlene Marko-Heim, and declaring our intent to be there, she was not there again to meet with Orlando YAYA. We left a letter at her office and we will be back, because we’re here to stay and we, as community members demand our voice be heard.

A week after we visited Central Florida Wawa headquarters, a call was placed to Ms. Marko-Heim to formally schedule a meeting so a delegation of YAYA members could personally express our concerns and demands. We are still awaiting a response, in the mean time YAYA will continue to urge Wawa to pressure RJ Reynolds to meet with FLOC!