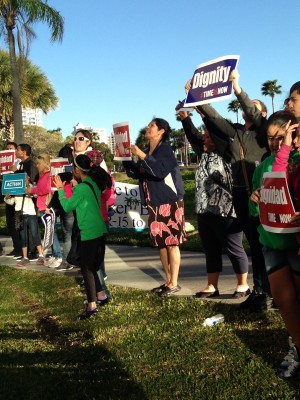 On February 15, Speaker of the United States House of Representative, John Boehner attended a fundraising dinner in Sarasota, Florida. Also ,on that day, I joined Mi Familia Vota on the trek to Sarasota to greet him with signs and chants urging for comprehensive immigration reform.

About 130 people from Tampa, Orlando, and Sarasota came together to tell Speaker Boehner to support immigration reform. We chanted, waved signs, and got a lot of attention from the press and folks passing by. We saw people attending the fundraising dinner watching us from the pent house, so we knew that Speaker Boehner and his crew could hear us.

This action also received a lot of coverage. Shortly after the event, there was an article posted in the Herald Tribune discussing the other Republicans that were also attending that dinner, thus our voices were heard by even more key people.

This action was important for YAYA because immigrat rights and immigration reform are an integral part to achieving farm worker justice. Undocumented farm workers have a looming threat of deportation, thus, bargaining for higher raises and better working conditions are out of the question. With immigration reform, farm workers can be on the path to citizenship to get what they deserve as hard working people in the United States. Immigration and farm worker justice go hand in hand and so it was very important and meaningful that YAYA joined Mi Familia Vota at this action.

I had a really great time attending this action and participating with Mi Familia Vota. This was the first immigration rally that I have attended and I have made it a goal to attend more during this pivotal year for immigration reform. My sore vocal chords were definitely worth the experience of meeting so many great people and advocating for crucial legislation. 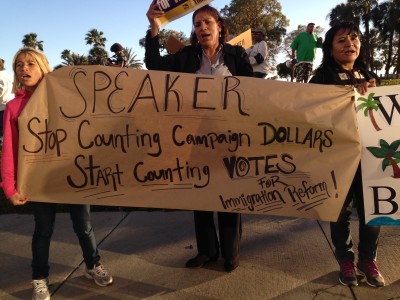