A Message from the UFW:

Prima workers are fed up. They want their contract, an end to the retaliation against key pro-union leaders, and an end to wage disparity. So on Friday, dozens of workers are rallying in front of the company office.

Gerawan Farming — producers of Prima brand plums, peaches, nectarines and grapes — talks about the “best wages” and other benefits the 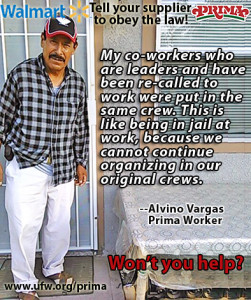 allegedly provide to over 5,000 farm workers who harvest these crops. But real Prima workers know the real working conditions. You see, approximately 1/3 of the current workforce are hired by third party labor contractors (FLC’s). These workers are paid $9/hr — $2 an hour less than the workers hired directly by the company, even though they do the exact same work as other workers!

On Wednesday, the UFW filed Unfair Labor Practice charges because Prima has unlawfully discriminated against FLC workers by applying negotiated wage increases only to direct hire employees and not increasing wages of FLC workers, creating a wage gap of $2/hr. This goes against the clear language of the Act, which requires the company to bargain on behalf of allemployees. But Prima acts as if it doesn’t have to follow the law.

As the biggest purchaser of Prima brand products, Walmart can use their purchasing power to make a difference — especially as they publically claim to hold their suppliers accountable in their supplier standards. Sadly, despite workers reaching out to Walmart, leafleting in front of their stores and more, Walmart has chosen to do nothing. Click here to send an email to Walmart today.