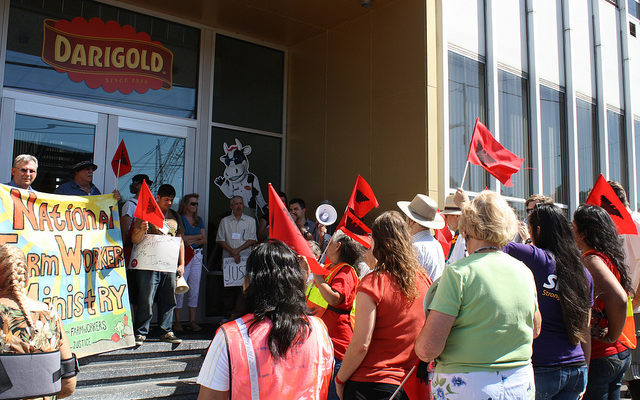 A Message from the United Farm Workers:

Fifteen days straight, 11 hours a day. Not a single day off. Milking cows, often without a break or time for even lunch. Brutal, sweatshop-like conditions at a Darigold dairy. While Jorge, not his real name, suffered, it was his daughter who was paying the highest price.

Several days into his 15 day marathon, he learned his daughter was cutting her wrists with razor blades and was suicidal. His wife pleaded with him, crying, to ask his supervisor for time off to spend time with them. His daughter pleaded with him. Jorge saw that other workers were getting days off, but the supervisor wouldn’t give Jorge a day off.

Jorge despaired telling us how his daughter wanted to “cut her veins and hang herself to end her life because she could not see me and she wanted to spend time with me even if it was one day. I could not give it to her because I was not able to get a day off….Her friend told us that she would talk about wanting to hang herself using a sheet and that she was only waiting to be alone so when we got back we would find her dead.” Jorge continued, “All I could do was cry and when I checked my daughter’s hands and saw the cuts.”Jorge tells us, “I felt bad because of the way the supervisors treated me and I felt I had their foot on my neck.”

Working at a dairy is hard work, even under good circumstances. But as we’ve shared with you, conditions at too many Darigold dairies are hardly ideal. Reported animal abuse, workplace injuries, no access to drinking water make the day in, day out grind almost unbearable.

But we rarely think about the price the families of these workers also have to pay. Jorge’s daughter made it through her crisis. Jorge now spends a lot more time with her, a result of getting injured at the same dairy and having to take time off. Hardly the reason a father should be able to spend time with his daughter.

We’ve been calling on Kroger’s executives, whose chain sells Darigold products in many of its stores, to take action. But they’re refusing to do anything. Please send your e-mail to Kroger board member David B. Lewis. As a board member, it’s his job to look out for Kroger’s best interest. How is the mistreatment of animals, workers and their families in anyone’s best interest?