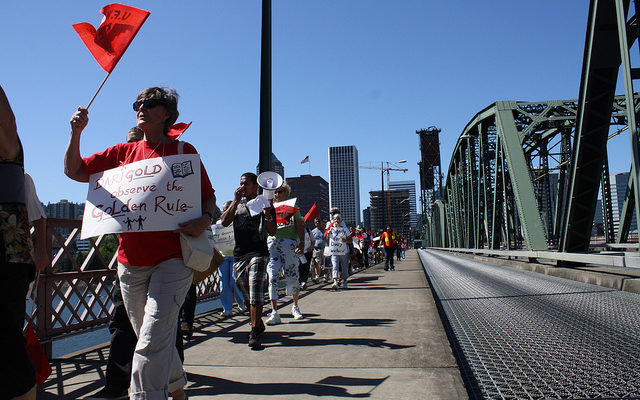 A Message from United Farm Workers:

Earlier this month we released photos alleging abuse of cows by dairies associated with Darigold Inc. Darigold claims these photos are not

current. But workers tell us the disturbing abuse of cows at Darigold farms is very real and very current. We’ve just released new photos documenting current disturbing mistreatment of cows at more Darigold dairies in Oregon. Some of these photos were taken as recently as a week ago. These new photos are from four more dairies. The question is, how many more Darigold dairies are doing the same? Some of the workers who shared these photos with us have asked not to be identified as they are scared of losing their jobs for speaking out. Without workers being protected, it’s very difficult to bring this information to light.  (Click here to see news release and photo handout.)

“Jose” had been working for his dairy for 6 months and tells us the photos he took on May 23, 2014 are of, “Cows with swollen udders and with mutilated teats, with blind eyes, with sick teats, with cows that aborted. And we are milking them this way because the foreman tells us that we have to milk them this way and all of this we report to the foreman and all of this has happened since I began working.”

“Federico” works at another Darigold facility and tells us about pictures taken in November of last year. He says, “There are cows that get milked with blood, mastitis, and some even with pus like a type of serum and the cows get milked like that. And all of that milk goes to the same tank that is taken by Darigold.” He tells us his photos include photos of “filters that show how these cows are milked. On the filters what you see are curdles of blood, mastitis, and pus that looks like as if it was serum.”

Luis and Mario tell us, “Even though we would report the injuries to the owners, I can tell that they would not give the cows any medical attention because in the days after reporting the injuries, the cows would continue in the rotation to be milked and with the same injuries. There are times when the cows get milked sick and with mastitis. We don’t want to milk injured or sick cows. We have even seen cows die as they’re getting milked.”

Of course we have repeatedly brought this issue to Darigold’s attention, but the giant company continues to ignore the workers and accept this abuse. Workers at Darigold dairies are putting everything on the line to bring these abuses to your attention. We believe that the companies who sell Darigold products have a responsibility to do something to provide both workers and the cows they milk with immediate relief. Fred Meyer is a major seller of this milk.

Please click here to send Fred Meyer stores an email now and stand with the farm workers who put their jobs at risk to protect Darigold consumers.