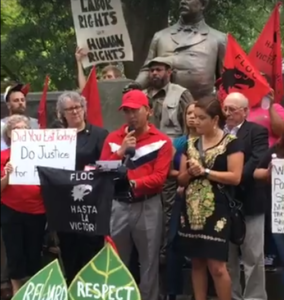 Visit NFWM or FLOC facebook to see the video of Eli speaking.

On July 18, NFWM, Triangle Friends of Farmworkers, the NC NAACP and others joined FLOC at the North Carolina Capitol for a press conference and delivery of petitions to Gov. Cooper’s office.

In a cynical move to crush the growing strength of farm workers organizing themselves to improve their living and working conditions, the North Carolina Legislature passed & Gov. Roy Cooper signed S615, the Farm Bill, with an amendment added at the last minute. This amendment is shameful and we must call it for what it is – an assault on the hard working farm workers who labor every day in North Carolina to put food on our tables.

State Rep. David Lewis of Dunn, NC, a tobacco farmer in Eastern NC was pushing an earlier Senate bill, which focused on stopping farm workers from organizing for better wages and working conditions. Not having the votes to pass the bill, Rep. Jimmy Dixon, a farmer from Warsaw, NC snuck it in as an amendment to the Farm Bill, S615, which was passed without opportunity for full discussion.

The amendment to S615 has two parts: 1. It makes it illegal for farmers who have signed union agreements to deduct dues from union members who want to pay dues, seeking to weaken the only farm worker union in the state, the Farm Labor Organizing Committee (FLOC) 2. It makes it illegal for farm workers to ask growers to sign an agreement with their union as part of settling wage or other legal violations, making it more difficult for farm workers to achieve union agreements that include wage increases, job security, benefits, and improved working conditions.

“Farmers have many ways to come together and improve their lives, such as trade associations and cooperatives; it is unfair for them to try and stop their own workers from doing the same by passing laws to make it illegal. Politicians that are also growers shouldn’t pass self-serving laws simply because they don’t want their workers to unionize. With the continuation of Jim Crow era laws that aim to stop a now almost entirely Latino workforce from organizing, this is an affront to freedom of association and smacks of racism.” said FLOC President Baldemar Velasquez.

At the press conference, FLOC announced that it is working on a Constitutional challenge to S615 and the National Farm Worker Ministry is filing complaints for conflict of interest with the NC Legislative Ethics Committee. A contingent from the press conference then marched to Gov. Cooper’s office to deliver the petition asking him to veto S615 with more than 5,000 signers; a petition he earlier ignored. 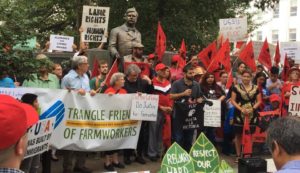