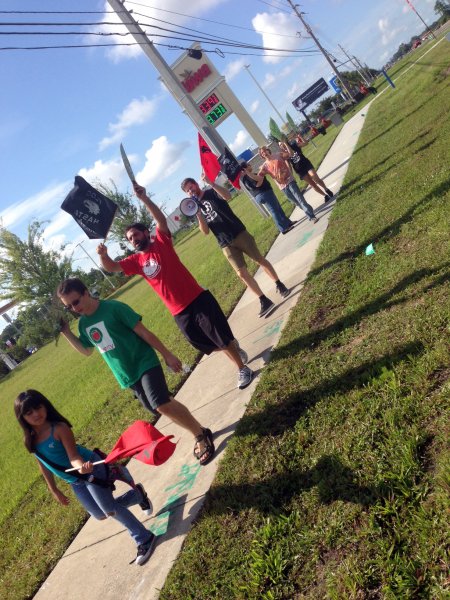 On Saturday, July 13th, thirteen members and supporters of Orlando YAYA braved the 10:00 a.m. Florida sun for a Rally at WAWA in solidarity of the Farm Labor Organizing Committee (FLOC).

This rally was done in support of FLOC’s ongoing campaign with R.J. Reynolds Tobacco Company, to get them to address the abuses occurring on tobacco fields and being experienced by tobacco pickers, and to those workers have freedom of association and collective bargaining rights. FLOC has asked us to step up the pressure on WAWA who is profiting from the sale of R.J. Reynolds Tobacco products, to urge R.J. Reynolds to meet with FLOC and address these issues. As a solidarity group, this was the first of monthly rallies we plan on continuing until WAWA agrees to support FLOC, or FLOC asks us to stop.

Overall the rally was a success. We made plenty of noise, and delivered a letter along with a detailed OXFAM report on the worker abuses in the tobacco fields. Melissa Maniau led a delegation to drop the letter off to the WAWA manager. The manager said that they would be passing the letter up. We will be following up with this manager at the next rally, and continue to pressure this store to ask R.J. Reynolds to address the abuses in their supply chain.

Tobacco pickers are farm workers, often following different crops like many farm workers to make a living. Working conditions often come with deplorable housing, sub-poverty wages, exposure to pesticides and nicotine which can be absorbed through the skin, lack of healthcare, long hours of stoop labor and sun exposure, harassment, racism, and lack of basic human and labor rights.

Without the right to collectively bargain for better conditions, it is groups like FLOC that have to do everything they can to try and hold employers accountable to abuses occurring in their supply chains. YAYA will continue to stand with FLOC in the fight for farm worker justice.