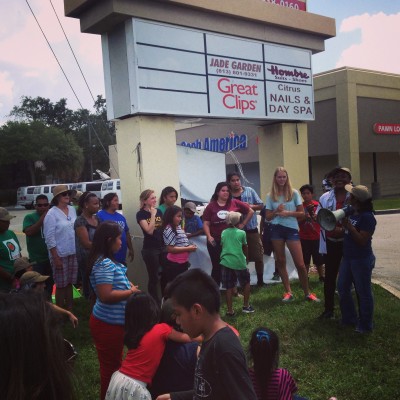 On Sunday, August 30th, Heather and I traveled to the greater Tampa area to take part in some farm worker solidarity. Since it was Labor Day weekend, we, at YAYA-NFWM, understand the importance of raising awareness on the issues that farm workers face in light of the labor protections granted to other industries. For those who aren’t aware, Labor Day honors the brave men, women, and people who put their lives on the line to grant basic rights such as a forty-hour work week, weekends, the right to overtime pay, the right to a union, and so forth in our jobs. However, you may not know that farm workers and domestic workers are excluded from the National Labor Relations Act and the Fair Labor Standards act that grants these basic rights.

Thus, our Sunday started off with a sermon by the longstanding National Farm Worker Ministry (NFWM) board member, Dr. Sam Trickey. He spoke at the Unitarian Universalist of Clearwater church about the importance of agricultural labor in the U.S. and how the fight for more just and sustainable agricultural practices is all of our responsibility. Historically accounting of his own life and involvement with the farm worker movement, Dr. Trickey chronologically expressed how the movement began with Cesar Chavez and Filipino workers strikes during the lettuce and grape strikes/boycotts to the newer farm worker organization, the Coalition of Immokalee Workers, that work on instating a code of conduct among tomato growers in southwest Florida. At the closing of his talk, Dr. Trickey called on members of UU to join the Pinellas Support Committee of NFWM in supporting the Farm Labor Organizing Committee’s campaign with Reynolds American Inc. (RAI) by delivering a letter to their local Wawa convenience store. Why Wawa, you ask? Well Wawa, among other large sellers and distributers of RAI tobacco products, makes majority of their sells from tobacco products. It is as much of their responsibility, as RAI’s, to fix the exploitation of tobacco farm workers, and so we at YAYA-NFWM and the PSC help the efforts of FLOC and North Carolina tobacco workers by expressing the concerns of these workers here in Florida.

After the service, Heather and I met up with the Coalition of Immokalee Workers (CIW) for their Labor Day Festival. The fest began at a Publix where farm workers, supporters, and community members picketed for over an hour continuously calling on Publix to sign the Fair Food Program. Of course, Publix managers met our picket with distaste although the exploitation of tomato farm workers in their supply chain is evident. Sooner or later Publix will realize that the broad-base support for the Fair Food Program will not be easily turned away; it is only a matter of time until they realize this truth. Once the CIW’s women delegation came back from their letter delivery, one CIW member, Nely Rodriguez, mentioned how some of the children present have been a part of the movement since they were in the womb. And so the fight continues! As the picket had come to an end, a lot of us traveled to a nearby park where the CIW hosted their first Labor Day Festival! At the fest, CIW fed us, played some awesome campaign-affiliated games such as ring-toss and Frisbee throws into targets regarding different pieces of the Fair Food Program and the ongoing campaign to bring justice to tomato pickers in Immokalee.

All in all, Labor Day weekend was fun, exciting, and super busy! I wouldn’t have it any other way as the fight for farm worker justice is just as pertinent as eating everyday (haha see what I did there)!