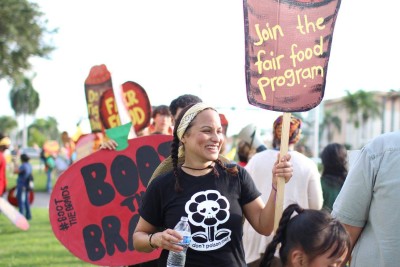 This past Thursday, September 10, Nico, Yessenia, Pricilla and I headed to Immokalee, FL to be part of the Student/Farmworker Alliance’s (SFA) 11th Encuentro. At this assembly, more than 80 students, young people, and other community stakeholders gathered to learn and act in solidarity with the Coalition of Immokalee Worker’s (CIW) fight for Fair Food. The four-day conference was comprised of learning about SFA and the CIW, and how they partner together. The weekend was packed with skill-building workshops, strategy sections, solidarity discussion, an Action at Wendy’s & Publix, and even a talent share. The last day was spent reflecting on this information/activity-packed weekend and on contemplating what kind of commitments each one of us would be engaging throughout the year. But all in all, the weekend offered a grand opportunity to build relationships and connections and to expand the work SFA does with the CIW.

The SFA is a national network of students and young individuals working alongside the CIW with the aim of eradicating the deplorable conditions endured by farmworkers in the fields. Farmworkers and young people are often objectified by the food industry; farmworkers are viewed as mere “tractors that cheaply harvest raw materials” while young people are seen as, “mouths that obediently consume branded products” (Source). The Coalition and SFA understand that working together make for a stronger and louder voice.
Each day started with a Dinámica to get us to move and prepare for the day! The weekend conference began with a CIW teatro and presentation by CIW members where we learned about the challenges and abuses faced by farmworkers. These consequently sparked the movement and inception of this worker-lead human rights organization more than twenty years ago. 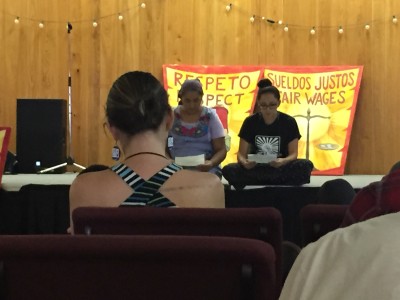 Food Program. The campaign educates consumers on the exploitative practices and the farmworkers plight in the tomato fields. The objective is to create consciousness and build an alliance between farmworkers and consumers and use the influential buying power customers possess to help end exploitation. The Fair Food Program is a partnership between farmers, farmworkers, and retail food companies committed to humane wages and working conditions for the workers picking the fruits and vegetables on participating farms. The enforcing aspect of the program is provided by the Fair Foods Standard Council, which oversees the implementation of the Fair Food Program in these farms.After the CIW presentation, SFA members took to the mic to give us SFA 101 and a timeline of the different campaigns involved in support of the Coalition. SFA has been in the frontline of the farmworkers movement for justice and dignity since 2000. We learned about the Taco Bell Boycott and the consequently campaign launched that landed a victory to the movement. Presently, the CIW is focusing on Wendy’s and Publix, two food giants (one as a fast-food restaurant chain and the other a supermarket chain with a dominating presence in Florida and with locations in Georgia, Tennessee, and the Carolinas) to sign and join the Fair Food movement.

Boot the Braids campaign, is a student-driving effort to get university officials to stop doing business with Wendy’s, applicable to those schools that have a Wendy’s on campus. This campaign has succeeded at 25 schools and universities across the nation. This week, the SFA is getting ready to launch the #SchoolingWendys Week of Action where actions will take place all over the nation to “Schooling Wendy’s” on the many ways “it has failed to make the grade: dignified wages and working conditions, the prevention of violence and forced labor, and respect for workers’ voices, just to name a few!” (Source) 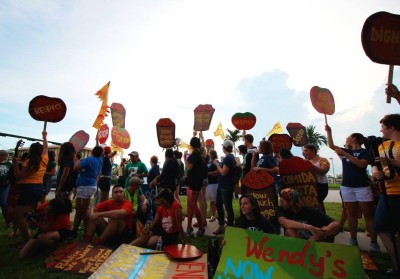 The #BootTheBraids campaign and #mypublixstory are two hashtags the Alliance is currently using to take the movement and organize on social media, drawing more attention and pressure to Wendy’s and Publix.

One of the activities planned during the four-day weekend was a tour of Immokalee with a CIW and SFA member. The tour began at the parking lot where farmworkers gather early in the morning to be picked and transported to the fields. We got to see first had the deplorable living conditions farmworker endure. Small, crowded living spaces and inflated rents are some of the hardships these workers withstand. During the tour, we visited a site where a case of modern-day slavery was reported and prosecuted in 2008 (Source).

We also walked by a government-built apartment complex intended to offer better housing for workers in Immokalee. Instead, the effort to provide government housing further exposes the local government’s lack of understanding about the growing industry. For instance, individuals interested in living in the housing property are required to sign year-long contract which doesn’t work for farmworkers who move around the United States depending on the crop and seasons.

Some of the eight skill-building workshops offered were, SFA How To: Organizing an Action; Organizing 101: Conversations to Move People from Apathy to Action; and, Art & Music in the Fair Movement. Each workshop was designed to prepare folks on how to talk about the message, organize, execute, and act.

Last but not least, I would like to give a big Thank You to YAYA and Nico Gumbs for the opportunity to attend and be part of this conference. It was life changing. Thank you to the CIW and SFA for being the best of hosts and for expanding my mind and soul to new heights. Gracias de corazón!