Following the National Farm Worker Ministry’s endorsement of the Familias Unidas por la Justicia (FUJ) called boycott of Sakuma Bros., Driscoll’s berries and Häagen-Dazs strawberry ice cream, we have been urging farm worker supporters to sign postcards to the companies.  We have thus far received postcards from 750 people of faith and conscience around the country.  A delegation from our partner Farm Worker Ministry Northwest agreed to deliver your postcards in person to Sakuma Bros. CEO Danny Weeden.  What follows is the report of that delivery attempt.  While Mr. Weeden would not accept your postcards, know that the message you – a supporter of justice for farm workers – wanted to send was heard by the company. 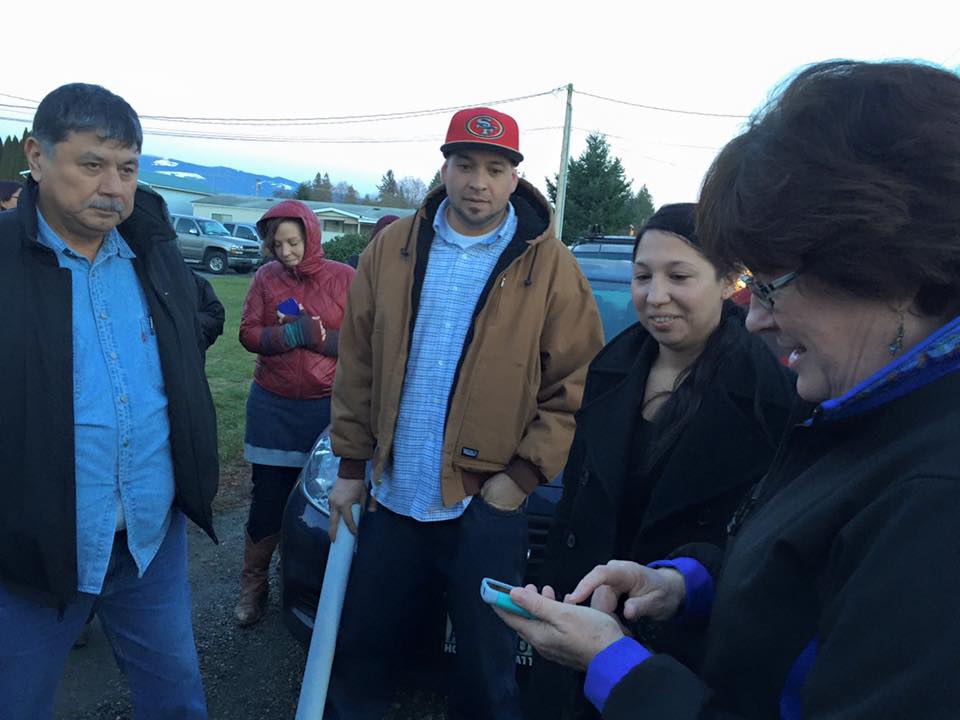 Dr. Rios reports to the crowd waiting outside of Sakuma offices, including FUJ President Ramon Torres (center) and Tirso Moreno, General Coordinator of Farmworker Association of Florida (left) about her meeting with Mr. Weeden. Debi Covert-Bowlds connects the NFWM national office via her phone.

On January 8, I and Farm Worker Ministry-Northwest (FWM-NW) members, Debi Covert-Bowlds, Carla Shafer, Kristen Barber and Mike Betz traveled to Mt. Vernon in hopes of meeting with Sakuma Bros. CEO, Danny Weeden in support of Familias Unidas por la Justicia (FUJ). Such a meeting, we later discovered, has not been granted to any FUJ member.

We had one message and action for the meeting: As a people of faith, we are committed to standing with those who are most marginalized and who have tenuous resources and power to be heard. We wish only to impress upon Weeden and Sakuma to recognize FUJ as the representative of the farm workers and to negotiate with FUJ a legally binding contract. In addition, we wanted to leave with Weeden the 750  postcards that you all sent, urging Sakuma to do the same. We expressed these goals in writing to Weeden ahead of time. We also told him that we would bring with us a small delegation of FWM-NW members, myself included, representing the National Farm Worker Ministry (NFWM).

We wanted to make clear that we are not mediators for farm workers, nor are we folks who speak on their behalf. We are a people who stand in solidarity with farm workers. We respect the farm workers’ right to speak for themselves and while we follow their lead, we also do our homework. For this reason, we did not and do not wish to debate the particulars of the improvements of the working conditions that Weeden has claimed. Most importantly, we are firm in our commitment–we are not going away! At least not until the specific call for justice for farm workers is met or our farm worker partners ask us to.

Weeden had various frustratingly contradictory messages:  According to Weeden, Sakuma hasn’t been heard. Worse– Sakuma has been demonized and misrepresented on social media. I know that Weeden reached out, in part, for the opportunity to be heard and in part to, as he put it, “dialogue” with the Ministry about the issues farm workers face and to discuss “what is best for the farm workers.”

So, we listened. However, the first frustrating contradiction in this regard came when Weeden limited the amount of NFWM delegates who could be present for the conversation at the very last minute. As it turned out, Weeden wanted to meet with only me. Debi, Carla, Kristen and Mike had already rearranged their schedules and made plans to attend, so they came along anyway to offer support. We thought perhaps when Weeden or his people saw that four other folks had come, they might find it in their hearts to allow us all in. Instead, Debi, Carla, Kristen and Mike had to wait outside in the car while I went in alone.

When I finally met with Weeden, he took his time showing me a picture of the Sakuma family in a field, explaining to me that Sakuma is a family business founded on family values. I knew that he was trying to establish a common ground, but as he talked I couldn’t help but wonder, “Does he realize that many farm worker families work the field together? Is knowing that Sakuma is a family business supposed to make me feel better about the exploitation of child labor that is perfectly “legal” in farm labor laws?

Still, I listened, hoping for and expecting reciprocity later. This was a call for “dialogue” after all. I listened as Weeden told me about all of the humanitarian efforts Sakuma is pursuing on behalf of farm workers. He made sure that I understood that many of these pursuits are grounded in a faith-based perspective: Sakuma has, Weeden told me,  partnered with Ralph Broetje at First Fruits and with an organization called Rural Concern to develop a model of corporate responsibility based on charity. Through these charity efforts, Weeden claimed that he hoped to ensure farm workers access to quality housing and food, some of which they provide on the farms.

In addition, he said that he also brought together members of the local faith community to talk with farm workers in a “safe space” where they could air any grievances, though he did not give me many details about this meeting.  He did not say where exactly the meeting took place, which specific faith communities were present, or when exactly it took place. According to Weeden, farm workers have options:

“Farm workers don’t have to work here,” he said, “so we want to create a working environment that persuades them to choose us.”

The best way to ensure that is to put it in writing, I told him. Again, while we do not wish to dispute the particulars of work improvements on Sakuma farms, we do know two indisputable facts: 1. Improvements at Sakuma have come either because workers have walked out, filed suit, or because the courts have required it . 2. Sakuma has reneged on several agreements in the past few years.

I sat in Weeden’s office for one hour and listened as he defended the name and principles of Sakuma. However, I think the strongest message Weeden sent was the one he sent when he refused to accept the 750 postcards you all sent from across the U.S., urging Sakuma Bros. to negotiate a contract with FUJ.

“I’m sorry, but I can’t accept these postcards,” he said, emphatically.

I was shocked and frustrated, to say the least. The NFWM had already reached out to Weeden twice, asking for a meeting. He had not accepted those requests, yet he claimed to be upset that he hadn’t been heard. He did finally acquiesce to this meeting–ostensibly for “dialogue.” We immediately responded, happy to finally have a chance to talk with him. We told him exactly what we hoped to accomplish in the meeting, including hand-delivering your postcards.

Weeden knew that we planned to deliver these postcards. It felt like a slap in the face.

What kind of dialogue can come from refusal to listen? I and others have thoroughly heard you out, Mr. Weeden. Now we ask that you offer some reciprocity and respond in kind: show us that you have listened by negotiating a contract with FUJ to guarantee in writing all of the things that you have argued you are already doing.

Watch the video of Dr. Gabriela Ríos’s report back after the meeting: 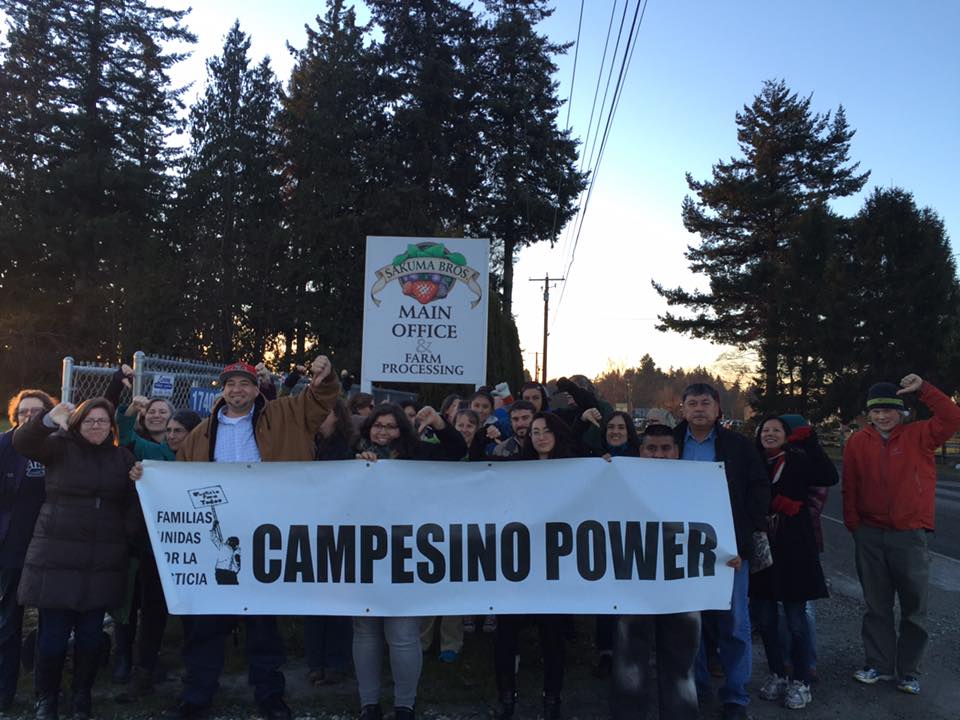 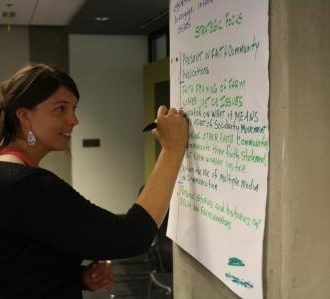