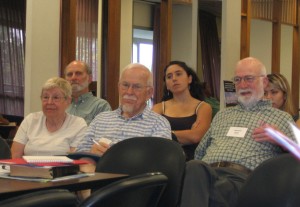 The Board and staff of the National Farm Worker Ministry (NFWM) honor the life and work of The Rev. Dr. Jon Regier.  Jon Regier passed away on September 2, 2014 in Durham, North Carolina at the age of 92.

Jon Regier was far more than a friend to and supporter of the National Farm Worker Ministry; he played a key role in the formation of NFWM and in the direction of the Migrant Ministry from which NFWM grew. In the 1950s and 60s, Jon was Executive Director of the Division of Home Missions for the National Council of Churches of Christ in the U.S.A, and as such oversaw and supported the Migrant Ministries which had grown around the country under the leadership of Edith Lowry. In NFWM’s 75th Anniversary Book, Rev. Bill Scholes, who had been Director of the Central Region on the Migrant Ministry, wrote of Jon Regier, “ On a more personal note: Jon Regier, my direct supervisor after Edith Lowry retired, was always completely supportive. I will always appreciate the freedom he gave us to work in ways we believed were right. Many times he took criticism for us when we never knew it.”

It was Jon Regier who, in 1961, played a crucial role in hiring Rev. Wayne “Chris” Hartmire as Director of the California Migrant Ministry. Chris Hartmire went on to become NFWM’s first Executive Director. Jon and his wife Joyce continued to be personally supportive of NFWM after its formation in 1971 and Jon served as an honorary member of NFWM’s 75th Anniversary Committee. 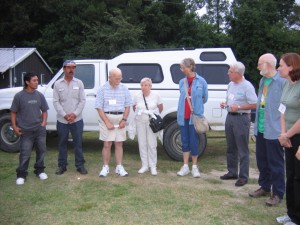 The Regiers and NFWM Board members visiting farm workers, summer 2007.

We of the “newer” generation of NFWM had the honor of meeting Jon and Joyce when they joined the NFWM Board for its summer 2007 meeting in Raleigh, NC. Jon and Joyce traveled with us to Dudley, NC to visit the new office of the Farm Labor Organizing Committee and visited labor camps with our delegation. We remember their grace and their down-to-earth wisdom and good humor.

Our condolences go out to Joyce Regier and all of their family. For one of the long distance runners of the farm worker movement – The Rev. Dr. Jon Regier – we say ¡PRESENTE!