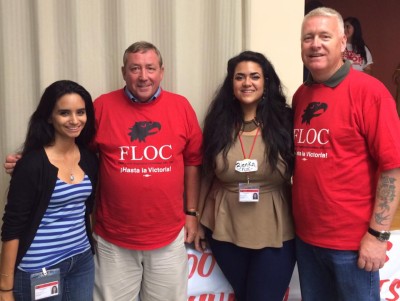 Respect, recognition, raise; those are the words I internalized all summer as part of the Union Summer Program in North Carolina. At first they seemed vague and desensitized but looking back on the experience, those words now carry more weight than I would like to admit.

Working with the Farm Labor Organizing Committee to sign up workers was a haunting experience. Witnessing the injustices that farm workers experience was much more different than the sporadic visits I had previously made to camps or the information I had read about. Witnessing these injustices also helped me in recognizing how to bring awareness to the level of the audience I was speaking to, which in this case were farm laborers, and the consciousness that I would never tell a worker that they are in dire need of something better.

The past summer weeks had a lot of shiny moments, like visits from members of British parliament or interviews from big-name publications, including the New York Times. Regardless of those media opportunities, what stayed with me most from this experience is the people I met and the impact they had on me. Reflecting back on this has been difficult because of the stark difference I face getting back into the groove of going to school and moving into a new place, because just a month ago I would’ve been speaking with someone who left their family behind to come live in an overcrowded space to do work that few people in this country want to do.

I personally did not encounter resistance from a grower or law enforcement but I know that this was a very real struggle for most of the interns and organizers on the campaign. In fact I would say that the resistance I faced was from workers who did not want to sign onto the union and though they always listened to the message my team and I would bring to them, the very real fears of having a family to give back to or concern over a multitude of issues was one (if not the hardest) to relate to. Because how do I, as a citizen and middle class intern who was only there for the summer, tell agricultural workers that I know what can help get them to where they deserve to be.

I learned quickly to get over my own insecurities but I always made the effort to not sound as if we were a charity or legal services to the workers because I never spoke to worker who didn’t want to share their story. I spoke with an incredible amount of people who made the long hours and lingering thoughts all worth it. I had the opportunity to meet a beautiful array of individuals; ranging from a young girl who came from Mexico at the same age I myself came from Argentina, but unlike me, she does not have citizenship or the ability to fully be a child in a country that lives in a perpetual state of “no child left behind” to a little boy who makes my heart ache when I wonder if he will ever have the chance to dream about what he wants to be when he grows up.

Assisting in the accumulation of 937 cards for FLOC was the literal personification of dedication by all the 20 organizers involved but the farm worker struggle cannot be solved by a single entity. As a solidarity network YAYA stands alongside FLOC in whatever capacity we are able to and it has been a privilege in many ways to meet these farm and migrant workers even if our relationship did not span over a couple of weeks. I encourage everyone to become involved and knowledgeable not only about just these issues but how our everyday food choices are a direct connection to a worker who picked that item.

Thank you to NFWM and FLOC as well to the directors of the Union Summer program at the AFL-CIO for allowing me to go through these times; I would also like to extend my sincerest gratitude to the team of intern organizers who I miss very dearly right now, I’m forever grateful to those moments we shared.