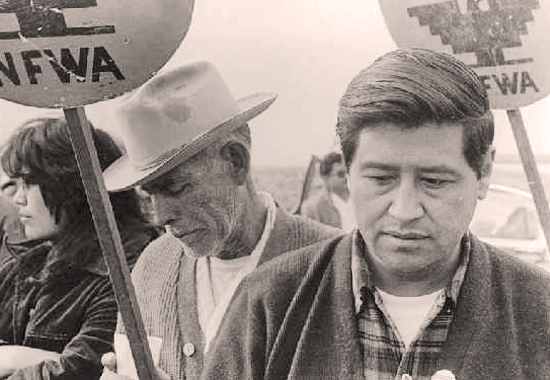 Dr. Charles Kyle, formerly on the board of the Illinois Farm Worker Ministry and at one time a representative from the Association of Chicago Priests to the National Farm Worker Ministry Board, shares a reflection on his friend Cesar E. Chavez that is meant for the faith community. A graduate of Northwest University with a PhD in Sociology, Dr. Kyle is a friend of Olgha Sierra Sandman, Baldemar Velasquez and Dolores Huerta. 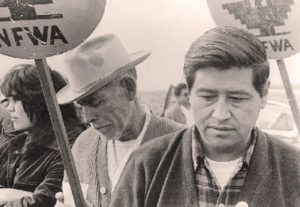 For more than twenty years, it was my honor to be a friend of Cesar E. Chavez, founder of the United Farm Workers, Nobel Peace Prize Nominee, and Recipient of the Presidential Medal of Freedom-our nation’s highest civilian award. I would describe Cesar as someone who was filled with the gifts of the Holy Spirit that Catholics receive at Baptism when the anointing minister admonishes them to be “just like Jesus.”

Cesar and I first met when I was taking lessons in liturgical Spanish and serving as a deacon at Holy Name Cathedral in preparation for priestly ordination. One day in the Fall of 1968, as six Chicago priest classmates and I were gathered at a meeting of the Cardinal’s Committee for the Spanish Speaking on Chicago’s near south side, an energetic and handsome brown-skinned man in his late thirties entered the room unannounced, and after introducing himself, proceeded to thank each of us for our commitment to social justice and for ministering to Latinos.

After we were introduced, Cesar shared with us the hardships faced by migrant farm workers in the fields of California and concluded his presentation by posing the following rhetorical question: “Isn’t it a shame that the people who pick the fruits and vegetables that make the United States the best fed nation in the world have to go to bed hungry and have a life expectancy of 49 years when others can expect to live well into their seventies?” Without skipping a beat, Cesar then grabbed a brown paper bag he was carrying with him, pulled out small red metal buttons bearing the NFWA (National Farm Workers Association) logo and the words”No Grapes” written in black characters and -after we had pinned them on our chests- invited us to join him to stand on a picket line outside a nearby supermarket. Little did I know that afternoon that as I made the simple decision to say “Yes,” that the decision would turn out to be what moral theologians describe as “a fundamental option for good” and it would permanently and dramatically change my life.

Once we were on our way to our destination, Cesar turned to me and said: “Father, I want to let you know that there will be a lot of law enforcement personnel here because I’ve been told by my union friends that I’m considered a “a subversive” by the Police Labor Squad (which would be later identified in a federal court suit as the infamous “Red Squad” -a unit that kept and shared files with the FBI on more than 10,000 Chicagoans labeled as “subversives”). Pausing to reassure me with a warm smile, Cesar went on: “But don’t worry,  because the more squad cars there are, the greater the likelihood we’ll get media coverage. That’s why we timed the demonstration to coincide with the nightly news hour.” Still smiling, Cesar added: “I also want to let you know that Charlie Hayes, president of the Chicago Meat Cutters Union, Hazen Griffen, from the Service Employees International Union, Dr. Jorge Prieto, who heads the Cook County Hospital residents training program, and I plan to get arrested in an act of non-violent resistance to protest what we consider an illegal injunction banning our picketing.”

“Actually,” he surmised, the smile still on his face, “the arrests will help our movement break the news blackout we’ve been experiencing. You see, Father,” he paused, “since the food store chains spend a fortune on media advertising, the newspaper publishers and the broadcast media corporations refuse to cover anything that might endanger those advertising dollars. So by being arrested, we will advance the farm workers cause as the coverage of our arrests help get the word out about who we are, what we are doing and why.”

Cesar’s calm demeanor and ability to see a good outcome coming from a frightening situation had a soothing effect on me. This early experience would be specially comforting fifteen years later, when I received from Cesar documents that the Red Squad had compiled about me for participating in the Farmworkers’ cause. Though I was first shocked reading through the heavily redacted 100-page file, I remember being pleasantly surprised to find out that at least, I had been accurately quoted. For example, one of the documents stated that I had read from the book of the Prophet Isaiah from the 56th Chapter and 6th verse at an inter-faith rally alongside Rev. David Chevrier, from the Wellington Avenue United Church of Christ; Rabbi Robert Marx, from Temple Solel; and Rev. Finees Flores, from the Christian Fellowship United Methodist Church. I remembered that the event, a rally, had been billed as “a Thanksgiving Day Prayer Service and Grape Boycott Picket Line” and that it was held in the parking lot of a large supermarket in an area now known as Chicago’s “Boys Town”. The dangerous words of Isaiah that I had read on the occasion, which had been painstakingly taken down by the Red Squad were these: “Is not this the fast that I have chosen? To loose the bonds of wickedness, to undo the heavy burdens, and let the oppressed go free.”

As Cesar would later explain, the files had been sent to his headquarters in La Paz in the early 1980s tightly packed in one of the 25 plus boxes filled with “subversive” files on himself, UFWA Co-founder Dolores Huerta, retired  SEIU International Secretary-Treasurer Eliseo Medina and other staff members and supporters. The United Farm Workers had received the files as part of the discovery process in the successful class action suit that had been filed against the Chicago Police Department for violating the First Amendment rights of the UFW,  the Alliance to End Repression, and the American Civil Liberties Union. To this day, I can not repress a chuckle when I proudly recall that, as a result of that court challenge, the Red Squad was disbanded. But more importantly, my first meeting that Fall afternoon in 1968 with an unassuming man who shared with me the Holy Spirit’s gift of wisdom, which he so deeply embodied, would become the first in a long series of memories of my friendship with Cesar E.Chavez.