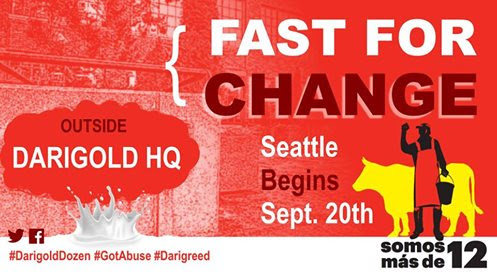 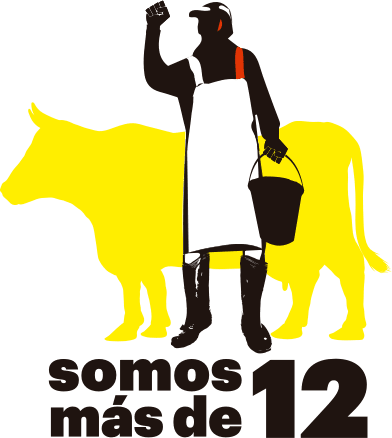 Dear Farm Worker Supporters,
In solidarity with the Darigold 12+ and UFW leadership on September 20th in Seattle, WA, NFWM is calling on its supporters, wherever you are, to pledge to pray, fast and act with these workers. Your pledge and actions send a message that retaliation will not be tolerated, farm workers deserve better.

On September 20th, fast all day or one meal to be in solidarity with the workers.

Pray before, during and after September 20th for farm workers to have the right to address their working conditions without fear of retaliation.

Act by taking time between now and September 20th to call the CEOs of Wal-mart and Starbucks, as Darigold retailers, to demand that Darigold treat its workers with dignity and respect.

NFWM is asking supporters to make a pledge to join the Pray, Fast and ACT efforts leading up to and on September 20th. Your pledge provides us with your name and location to share with these farm workers so they will know that they have allies around the country. If you can be in Seattle, go to Seattle, but if you cannot, then make the pledge! Click here.

Click here to make your SOLIDARITY PLEDGE with DAIRY WORKERS.

Hello, I’d like to speak to ____ (CEO Name). I am calling because I want to make sure ____ (Company Name) is aware that Darigold workers throughout Washington state are facing gross mistreatment by their employers including sexual harassment, racial discrimination, unsafe workplaces, and stolen lunch breaks. As ____ (Company Name) is a Darigold customer, I hope you will demand that Darigold treat their workers with dignity and respect. Thank you!

We Pray for Justice for Dairy Workers

Fast with the Dairy Workers

PLEDGE TO FAST FOR ALL OR SOME PART OF SEPTEMBER 20th IN SOLIDARITY WITH THE DAIRY WORKERS. NFWM WILL GET THE WORD TO THE WORKERS THAT YOU ARE STANDING WITH THEM.

Dairy farm workers are some of Washington’s hardest workers, often spending more than 12 hours a day on the job across nearly 400 dairies. 90% of Washington’s dairy farms supply Darigold, a large cooperative that sells more than $2 billion worth of dairy products every year.

Thank you for standing with farm workers.