Pioneers of the Farm Worker Movement Honored by Obama Administration 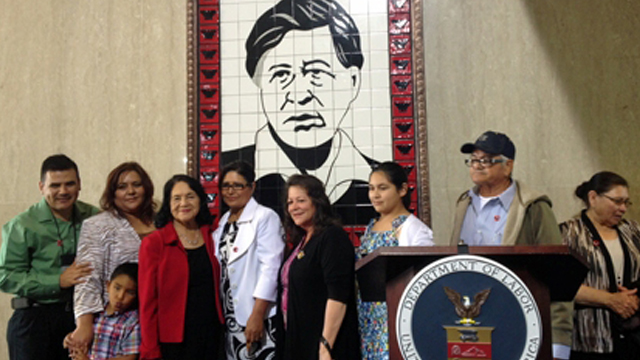 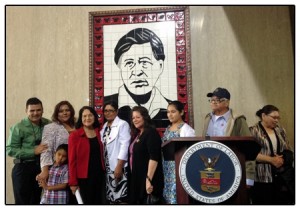 I was honored to be part of a U.S. Department of Labor (DOL) event that lifted farm workers up for national recognition. On March 26th, the “Pioneers of the Farm Worker Movement” were inducted into the DOL’s Hall of Honor and the Cesar Chavez Auditorium was dedicated. The event was spearheaded by Secretary of Labor Hilda Solis, the daughter of a farm worker and a long-time champion of worker rights.

Nearly 400 people were in the audience as Secretary Solis, the Secretary of Agriculture Thomas Vilsack, the Secretary of the Interior Ken Salazar, and the Director of the White House Domestic Policy Council Cecilia Munoz were joined by Dolores Huerta – UFW Co-founder, Paul Chavez – Cesar’s son and Director of the Cesar Chavez Foundation, and Arturo Rodriguez – UFW President. Each paid tribute not only to Cesar’s vision and leadership but to all those whose commitment helped build the movement. It was a commitment which lead to the death of five UFW martyrs in the 1970’s who were killed during the strikes– killed simply for standing up for their rights. Their family members were present as Arturo told their stories and we applauded through our tears.

We applauded also those who carry on that commitment and the changes won by farm worker leaders who were present from around the country including Baldemar Velasquez –President of FLOC, Ramon Ramirez – President of PCUN, and Lucas Benitez – Co-Director of CIW. I was recognized for NFWM and for the importance of the faith community to the struggle. We were also reminded how much there is yet to do. Secretary Vilsack called us to keep up the fight for immigration reform. “Si se Puede” the audience thundered in response.

This movement is led by farm workers and it was given welcome praise at this event by caring political leaders. But it belongs to all of us who are connected to farm workers every time we eat. Their struggle is our struggle and it continues. Que Viva Cesar Chavez! 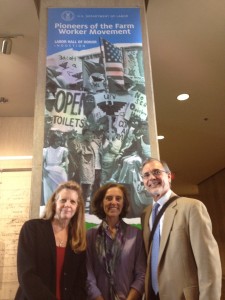 Click here to view the DOL slideshow of photos of the event.

Click here to read the post about the event from the National Council of Churches, which quotes NFWM’s Virginia Nesmith.

Click here to read the Washington Post’s article about the event.

“This event is enormously significant in terms of recognition of farmworkers,” said Virginia Nesmith, director of National Farm Worker Ministry. “Farm workers have tended to be an invisible population.” Nesmith said. “Whether you start with orange juice in the morning, salad for lunch, or strawberries for dessert, you’re connected to farm workers. Yet most people are not aware of the sacrifices they make to provide our food, the kind of conditions they endure – the low wages, the exposure to toxic chemicals, the heat stress, they don’t know that people die in the fields every year.”
Excerpted from National Council of Churches News story, “Faith leaders join in honoring farm workers at Department of Labor hall of honor,” March 27, 2012