Patriarchy and Publix: Why We Need the Fair Food Program 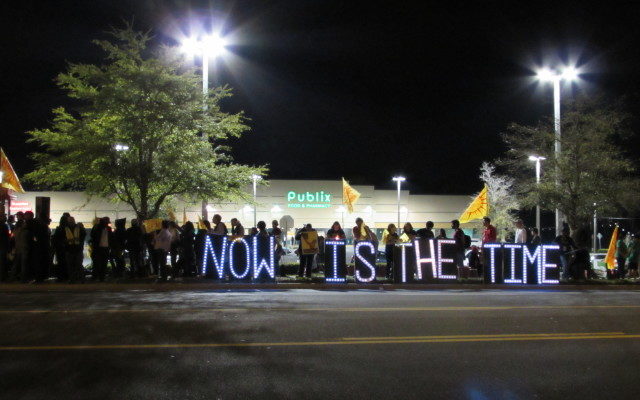 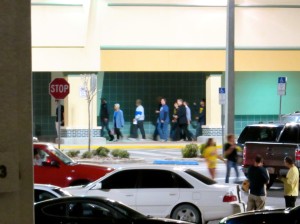 The delegation of religious leaders make their way to the Publix entrance in Lakeland, Florida.

If you live anywhere near the sunny state of Florida, bets are you have heard of a group of tomato pickers who are taking the East Coast by storm.  Formed in the 1990’s by a small group of workers who began meeting in a local church to discuss ways to better their living and working conditions, the Coalition of Immokalee Workers (CIW) now boasts accolades from both the United Nations and the White House.  Their Fair Food Program, which ensures better wages and living conditions for tomato pickers in Florida, is transforming farm workers’ lives in the small town of Immokalee and making a big splash in the larger workers’ rights arena.

On Friday, March 14th, I joined hundreds of other supporters for a 24-hour interfaith prayer vigil calling on Publix Supermarkets to join 12 other major corporations, including Wal-mart, by signing onto the Fair Food Program.  As part of the vigil, I joined a delegation of eight religious leaders attempting to speak with the manager of the Southgate Publix in Lakeland, Florida about the horrendous conditions workers are facing in the fields.

If you have any doubt as to whether the rights of workers, women or immigrants are still an issue in 2014, I can assure you that the manager of the Southgate Publix in Lakeland is not helping matters.  A clean-cut, nicely dressed Caucasian gentleman, the Publix manager wasted no time extending his hand to other Caucasian men from our delegation.  While I and other female clergy had to assertively offer our hand to be recognized, the Publix manager easily laughed off our concerns while being quick to argue with the men.  The Publix manager also continuously interrupted Gerardo Reyes of the CIW even after inviting his comments. 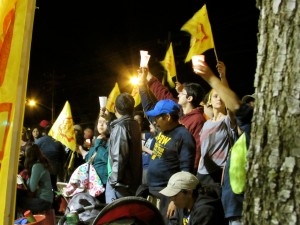 Hundreds look on in prayerful support of the religious delegation during Friday’s vigil.

Eventually, the Publix manager had us removed from the property by the Lakeland Police Department but not without first pulling out the last unrecognized female from our delegation.  Claire Comiskey of Interfaith Action of Southwest Florida was directed to the center of the parking lot by a Lakeland Police officer, a good 500 feet from the rest of our delegation, where she was chided not for laws our delegation may or may not have broken but for alleged “broken promises” the Coalition and its supporters had made with local officials about an attempted visit.  After close to 15 minutes of isolated conversation with a male police officer, Claire was released and rejoined our delegation.

The patriarchal intimidation our delegation experienced Friday at the Southgate Publix in Lakeland is but one reminder of the reality many agricultural workers face everyday in America’s fields.  While our delegation was protected from serious abuses by the presence of hundreds of onlookers, the majority of farm workers do not share such protections.  Many farm workers lack proper grievance policies on the job, do not have proper equipment to protect themselves from pesticide exposure, and many female farm workers have no safe means with which to report sexual harassment or rape in the fields.  The Fair Food Program seeks to change all of that for the workers in Immokalee by creating a partnership of social responsibility between invested parties.

I have serious concerns about Publix and their persistent refusal to join the Fair Food Program.  I believe Publix executives can easily spare the “one penny more per pound” that the CIW is asking for so tomato pickers can have better living and working conditions. Now, I also have grave concerns about the leadership that Publix chooses to represent its interests to concerned consumers.  The disrespect certain members of our delegation experienced Friday night stings not for me but for the thousands of farm workers who continue to wait, now four years later, for Publix to do the right thing.

Now is the time, Publix, to join the Fair Food Program.  The world is watching.