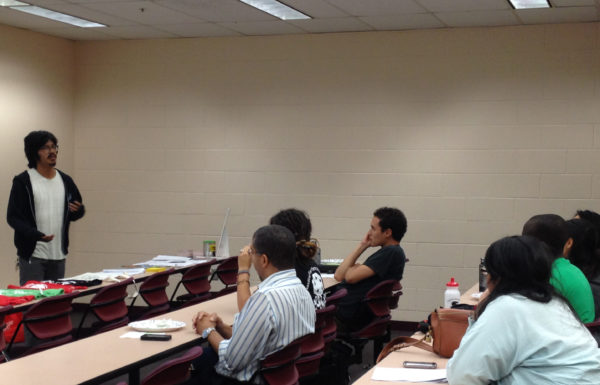 On November 7th, 2013, Orlando YAYA held a membership meeting at the University of Central Florida, in order to share the work of YAYA and to raise awareness about farm worker issues.

Core YAYA members started the night by talking about the organization. Cristina opened the meeting with a general overview of YAYA and the National Farm Worker Ministry, and how they work in solidarity with farm worker organizations and unions like the Coalition of Immokalee Workers (CIW) or the Farm Labor Organizing Committee (FLOC).

We were told about both of these organizations’ campaigns:

After talking about the actions, YAYA member Benji introduced the film Harvest of Dignity. During the film I felt a sense of pride in the work that NFWM-YAYA is currently doing; this feeling was noticeable in the current members as well. The film revisited North Carolina farms that were filmed back in the 1960s in the film Harvest of Shame – Edward Murrow’s documentary on the plight of American immigrant farm workers. Surprisingly enough, some of these farms and worker’s homes have not changed since they were filmed in the 60’s.

After a lively discussion about the farm worker movement, and how to further propel the movement, much of dialogue led to the simple action of spreading the word. Be vocal, tell those who are unaware, and advocate. And I think everyone ought to know where their food comes from and how those who picked that food are being treated.

As a newcomer to YAYA and the farm worker movement, of which I had no clue was this alarming, this initial meeting for me was eye-opening, and definitely drove home a clear point. I thought the film covered many topics related to the plight of farm workers: sexual harassment, terrible living and working conditions, pesticide exposure, low wages, slavery, and child labor.

As a part time worker myself, I was incredibly humbled by the film. I was very much at odds with my job, but the film made it clear how privileged I am as a worker, since I am protected by the Fair Labor Standards Act.

It was just another reminder of how large of an issue the farm worker plight is, as these large agribusinesses depend on cheap, migrant labor to keep their current profits. Such wage exploitation must be halted for it violates basic civil rights. Farm workers deserve more respect. They pick our food, and sometimes die trying to serve us fresh fruit and vegetables.

Overall, I thought the meeting went well. The information presented was very enlightening and the film The Harvest brought home a clear point: a sense of urgency to take action and stand in solidarity with farm workers nationwide. It would be great to have more new members or interested people attend events like this. We must ensure that people are aware of these issues.

This meeting got us very excited about the upcoming actions. I think many of us felt that the Saturday rallies were going to be successful.

I would like to thank those involved with making the film, The Harvest, and all of those working in solidarity with farm workers.

And a special thank-you for the workers who pick our food.