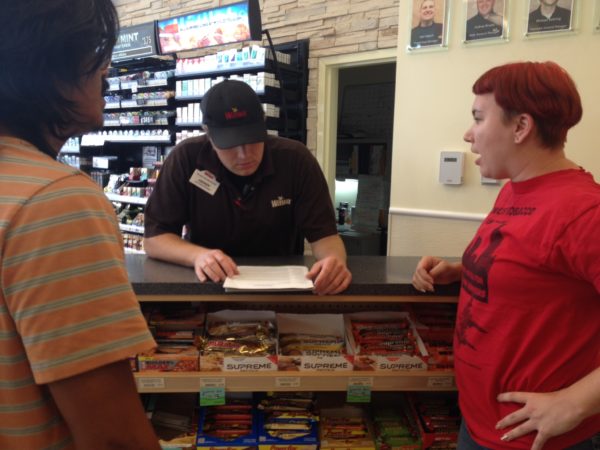 On Saturday, July 19th, several of us YAYAs paid a visit to the new University of Central Florida Wawa store that opened this past May. Continuing our work with the Farm Labor Organizing Committee’s (FLOC) campaign with RJ Reynolds Tobacco Company, we wanted to express our concerns to the local management regarding the mistreatment of tobacco farm workers and the squalid living conditions found among most camps. The campaign aims to bring awareness to the aforementioned issues facing tobacco farm workers as well as others such as green tobacco sickness, an illness which attacks workers neurological system and induces vomiting, fatigue, fainting, and other symptoms.

YAYA-NFWM has been extremely active in FLOC’s campaign targeting Wawa convenience stores, whose major profits come from tobacco sales. We want to hold them accountable for profiting from workers in the tobacco supply chain who suffer from pesticide exposure, low pay, and no access to grievance processes.

Wawa has a lot of leveraging power as a major seller of RJ Reynolds products, but so do we as consumers. My power as a consumer became even more apparent to me after YAYA’s excursion to North Carolina this past May to meet with FLOC members and see farm workers’ conditions firsthand. It was an eye-opening (and ear-opening) experience to hear from workers about the conditions they must continue to work under and the lives they must live with little to no visibility in the tobacco (and larger agricultural) industry. My experience in North Carolina with FLOC and with farm workers reaffirmed my intentions and pulled me full circle to this particular Saturday.

Four YAYAs joined me that Saturday to deliver a letter to the local store manager at Wawa #5145 hoping that it would be passed along to the CEO Chris Gheysens. Along with the letter, we included an Oxfam report, detailing the abuses tobacco farm workers face, and my first-hand account of what I personally perceived of the living and working conditions of tobacco workers in North Carolina.

The store manager took the time to speak to my friends and me about the conditions farm workers face in order to provide us with the fruits, vegetables, and tobacco we consume.

YAYA-NFWM will continue to put pressure on Wawa and RJ Reynolds until justice for tobacco workers is a reality. It is only a matter of time with the current Respect, Recognition, and Raise campaign (which two of our YAYAs interned with) until all companies in the tobacco supply chain will feel the power of the workers untied under one union: FLOC.

Wawa’s core values claim that they “value people” and “do the right thing,” yet when presented with the countless injustices farm workers in their supply chain face, they choose to do nothing. The heat is about to turn up, Wawa, and not only because it’s Florida, so what side of the fire will you be on?