Only 18 Days Left to Organize! 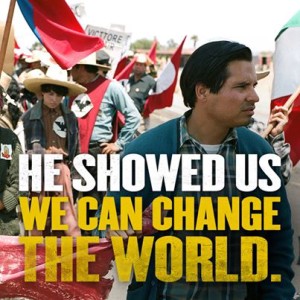 When Cesar Chavez first started organizing farm workers in the 1960’s, his first action was to hit the streets and talk to anyone and everyone who would listen.  Hit the streets with us!

On March 28th, 2014, Cesar Chavez: An American Hero will be released in theaters across the country.  This is the first major motion picture depicting the accomplishments of a Mexican American icon in the United States. This powerful film gives light to the farm worker movement and the sacrifices made by many Latino families to provide better opportunities for the next generation.

Films such as this are judged by how well they do the very first weekend they’re released at the box office. To guarantee the continued success of the Cesar Chavez film, we need your help in packing theaters across the nation on March 28th!

1)  You can be part of history in the making!  Never before have farm workers been the subject of a major motion picture.  View the Cesar Chavez Movie Trailer.

3)  You could win a NFWM swag bag by participating in our “Pack the Theater Selfie Contest“!

4)  ¡Sí Se Puede!  Everyone will be a farm worker advocate after seeing the movie!  Equip your friends, family and faith community with up-to-date farm worker action alerts by signing up for the NFWM mailing list here.