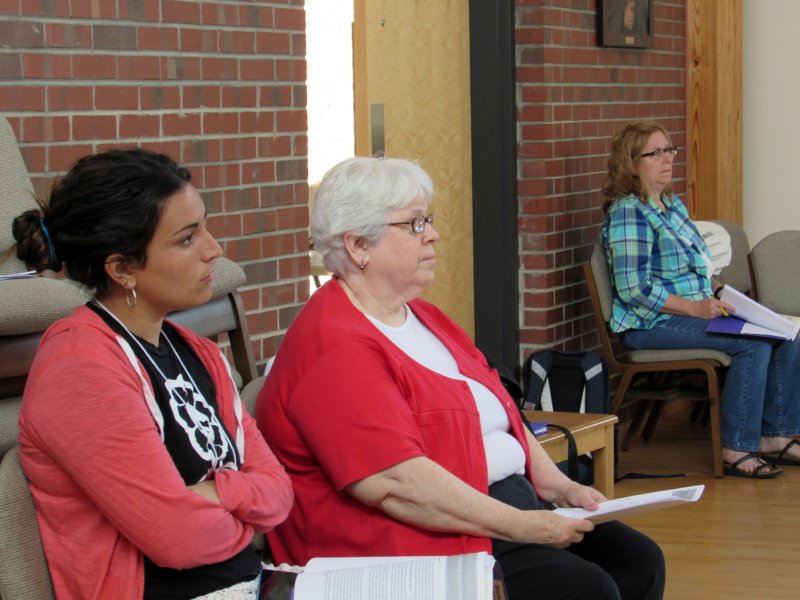 From August 14th-17th, I was able to attend the National Farm Worker Ministry’s (NFWM) board meeting in Raleigh, North Carolina. Every six months, NFWM board members meet to discuss current campaigns as well as what has been going on within NFWM and the farm worker movement.

It being my first board meeting and I, not knowing what to expect, was anxious and excited to see what the three-day trip would bring. The board meeting was held at a Church located right next to NFWM’s new office in Raleigh, NC. This was really convenient for us and the church was very kind to let us use their space.

Before commencing, there was a microphone passed around so that everyone could introduce themselves, and say where they were traveling from and whom they were representing. It was then that I knew I was in a room full of brilliant, compassionate, and dedicated people traveling from all across the country to meet here and discuss farm worker justice. I was humbled and knew I was exactly where I was supposed to be.

The board meeting itself consisted of reviewing the campaigns and organizations that NFWM currently supports, including the Coalition of Immokalee Workers’ (CIW) Fair Food Campaign, which is asking for corporations to pay a penny more per pound for tomatoes, as well as the Farm Labor Organizing Committee (FLOC), a farm worker union located in North Carolina. We also discussed what the different member organizations connected to NFWM have been doing and what’s to come.

After lunch on the first day of the board meeting, we drove an hour away from Raleigh to Dudley, North Carolina, where FLOC’s office is located. There we met with; Baldemar Velasquez, President of FLOC; Justin Flores, Vice President; and some of the organizers who were still there from their tobacco picker summer sign-up campaign. We listened to Baldemar as he discussed future plans and strategies for FLOC to win their campaign against RJ Reynolds Tobacco Company. One could feel the power within everyone in the room, and as Baldemar spoke we clapped for past victories and for victories to come.

Later that evening, after a lovely dinner, we dispersed into groups to go visit labor camps. My group visited two camps; the first was given the name “Camp Haiti” due to its large amount of Haitian workers. There were about 50 people living at the campsite, and although I wasn’t able to see inside the rooms, we saw that they only had 2 bathrooms and one kitchen. Upon our arrival, the workers were just getting home from a 12- hour shift in the tobacco field. We wondered about our timing in visiting these folks, and although some were reluctant to speak with us, there were two nice gentlemen with whom we were able to talk with. One of them didn’t know much English, but could speak Creole, French, and a good amount of Spanish due to the Hispanic workers- I thought that was pretty impressive. Luckily, board member Sophia DeWitt knew French and was able to talk with him.

The people I saw at the camp ranged from all ages, and some of the workers looked as young as 13 years old. They were all currently working in the tobacco fields and most were planning to migrate to Florida after tobacco season. As we left, I felt uncomfortable knowing that I could get in the van and drive away and would be sleeping in a bed in an air conditioned room. The workers would have to stay, and would soon go to sleep only to work another 12-hour shift the next day, picking tobacco under the hot sun without much of a choice.

At the other camp we visited, we spoke with a man named Sergio. He came here from Mexico 9 years ago and has been working in the fields ever since. Currently, he was harvesting jalapenos and was nice enough to give us some. The next day as we debriefed on our experiences at the farm, one of the girls in my group, Amy Westphal, told us she recalled seeing the name of the farm where Sergio worked. A few years ago, she was the manager of the produce section at her local supermarket and remembers seeing the boxes from Triple J Farms- the same name we saw posted at the campsite where Sergio was living. It was one of those moments where things come full circle, but there are so many things wrong with that circle.

On the second day of the board meeting, I, along with YAYA Coordinator Nico Gumbs, presented on behalf of YAYA. I was asked to highlight one event within the past six months that impacted me. I chose to talk about the RJ Reynolds shareholders meeting that I attended this past May with six other YAYAs. After visiting the camps the previous day, I was happy I chose to talk about FLOC’s campaign and the shareholders meeting; it means more to me now than ever that we get justice for North Carolina tobacco workers.

Later that night was the benefit dinner, which was a huge success. We raised over $8,000 to help continue to fund NFWM and ate delicious food thanks to the kind staff of Pullen Memorial Church. I felt so honored and humbled to be surrounded by so many wonderful people doing amazing things in our world. The three days were over before I knew it, but I appreciated every moment. I was finally able to meet all the board members and have some really great and meaningful conversations with them.

The thing about social justice work? It isn’t easy. It isn’t easy when you realize how greed controls those in power and affects the lives of those that suffer from the ripple effects of greed. But when I am surrounded by people who are just as (if not more) hungry for justice, I become revitalized. As I boarded the plane to head home to Orlando, I couldn’t help but smile as I replayed the weekend in my head; all the hard-working, empathetic, selfless beings that I encountered. For me, the National Farm Worker Ministry’s board meeting wasn’t just a meeting, but a pivotal moment in my life and an experience for which I will forever be grateful.