On May 23rd, 27 shareholders/proxies were credentialed to attend Wendy’s annual shareholder meeting in Dublin, OH.  Just one day before, NFWM declared a Day of Prayer and Action to invite supporters to offer prayers and good thoughts AND to call the CEO of Wendy’s, Todd Penegor, to let him know that we were standing with the Coalition of Immokalee Workers (CIW) in their request for Wendy’s to sign the Fair Food Agreement.  For more background on the Wendy’s campaign, VISIT.

Inside the shareholder’s meeting, fourteen people were chosen to speak as shareholders or for proxies.  Among the speakers, the first identified as a proxy for Sam Trickey, long time board member and supporter of NFWM and the farm worker movement.  The second speaker was Lucas Benitez, co-founder of CIW.  Edie Rasell, former representative of the United Church of Christ to NFWM’s board until her retirement in late February, spoke on behalf of both the UCC and the Sisters of the Immaculate Heart of Mary in Michigan.

Although time ran out before being called on, Sr. Karen Bernhardt represented NFWM as well as her Order, the Sisters of the Humility of Mary.  To see Sr. Karen’s intended remarks, click here.  Since she did not get to speak, Sr. Karen sent her statement as a follow up letter to Mr. Penegor.  Kelly Litt, Justice Promoter for the Dominicans for Peace, one of NFWM’s Supporting Organizations, was also present and prepared to speak but was not chosen.

Another NFWM board member who was present at the Wendy’s shareholders meeting was Andrew Kang Bartlett of the PCUSA.  Here is a link to Andrew’s account.

Wendy’s stated that their profits are up and their strategic plan says they are doing the right thing.  They are sponsoring audits conducted by third party monitors for all their vegetables, not just tomatoes.  Would they name the companies doing the audits – no.  And they made it clear they had no plans to negotiate with CIW or the Fair Food Alliance.  For more about the CIW report on the shareholder meeting, VISIT. 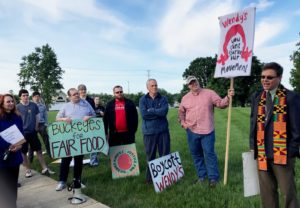 And one of our summer interns, Andy Blakely was able to attend the demonstration outside Wendy’s Headquarters.  He reports that, “A number of different groups gathered to stand in solidarity with farm workers. Representatives from student groups, clergy members, and farm workers spoke about their support for the Fair Food Initiative. I spoke briefly, saying that we are people of faith who believe that all human beings are created in the image of God, which makes it absolutely necessary to respect all people. We marched and chanted and sang and also had some productive conversations with passersby and at least one shareholder.”