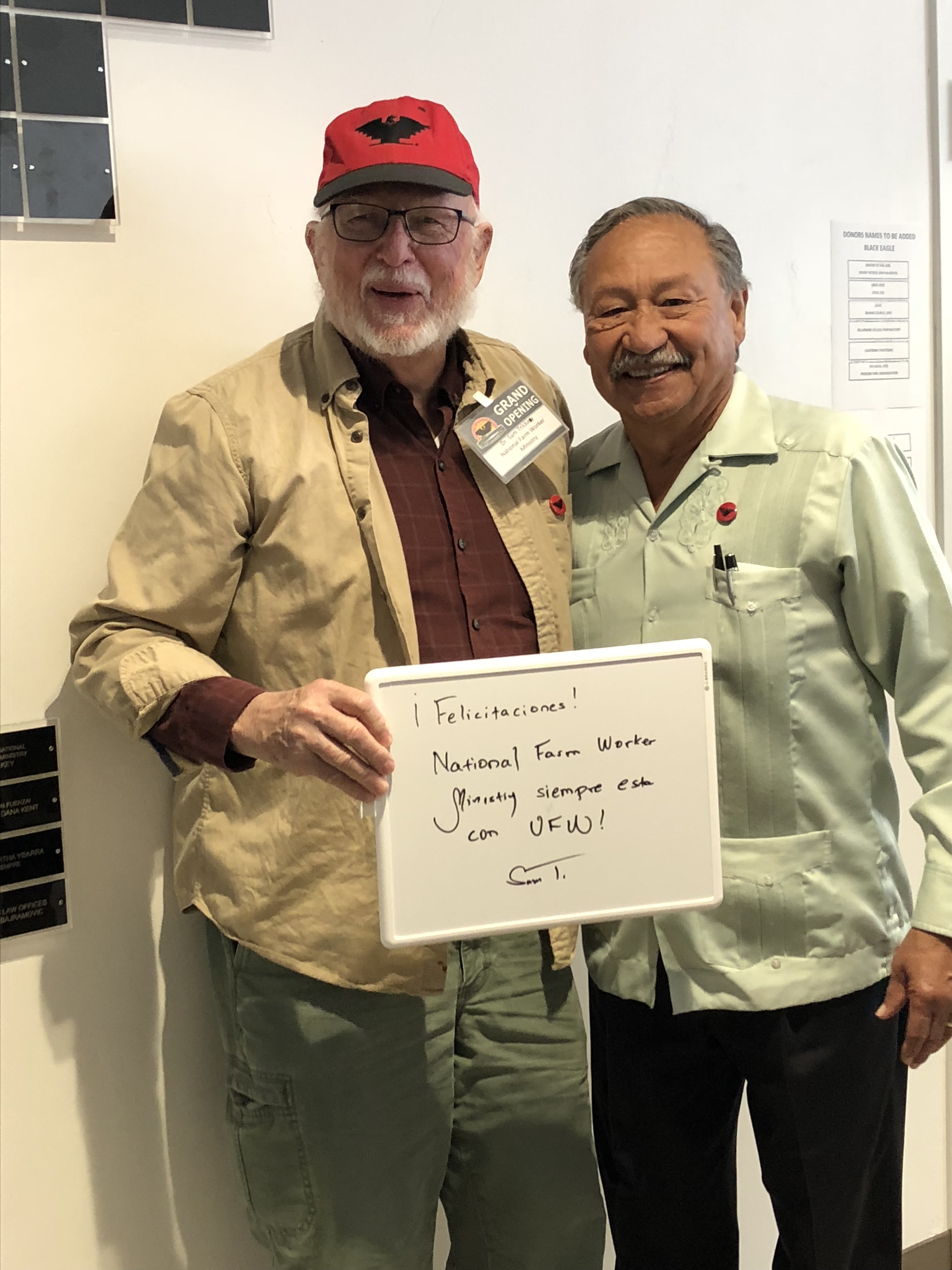 “When we went back to school in the fall and the teacher asked what we’d done during the summer, other kids talked about Yosemite and beaches and Disneyland.  I always waited and then said ‘the same’.  Because I was ashamed to say my family had to spend the summer picking in the fields around Salinas.”  That’s how Damian Trujillo, NBC News reporter and producer in the San Francisco Bay area, started the celebration of the grand opening of UFW’s Central Coast Farm Worker Center, May 20th.  “But”, he said, “today farm workers are taking charge of their lives and are unashamed, because we put food on the nation’s tables.  This center shows just how far we’ve come”.

Suzanne Darweesh, Cynthia Karle (my wife), and I were there to see the Center and join the celebration.  More than 125 people attended, including farm workers, supporters, UFW and UFW Foundation staff and friends, and local and regional officials. Suzanne and her husband and I had made individual contributions that were recognized with tiles in the UFW Eagle mosaic in the Center entry way. Suzanne also was representing Orange County Interfaith Committee to Aid Farm Workers.  I had the honor of representing NFWM (which also has a tile) since none of our staff could attend.

Participation in the program by elected leaders showed just how much the farm worker movement has changed politics and society in the region over the last 50 years.  Bill Monning, majority leader of the California State Senate, presented a congratulatory proclamation. Early in his career Monning was a UFW attorney.  Steve McShane, a Salinas City Councilman, celebrated the UFW Foundation investment in the new center as part of revival of down-town Salinas.  Santa Clara County Supervisor Dave Cortese congratulated UFW on its contributions to economic prosperity. 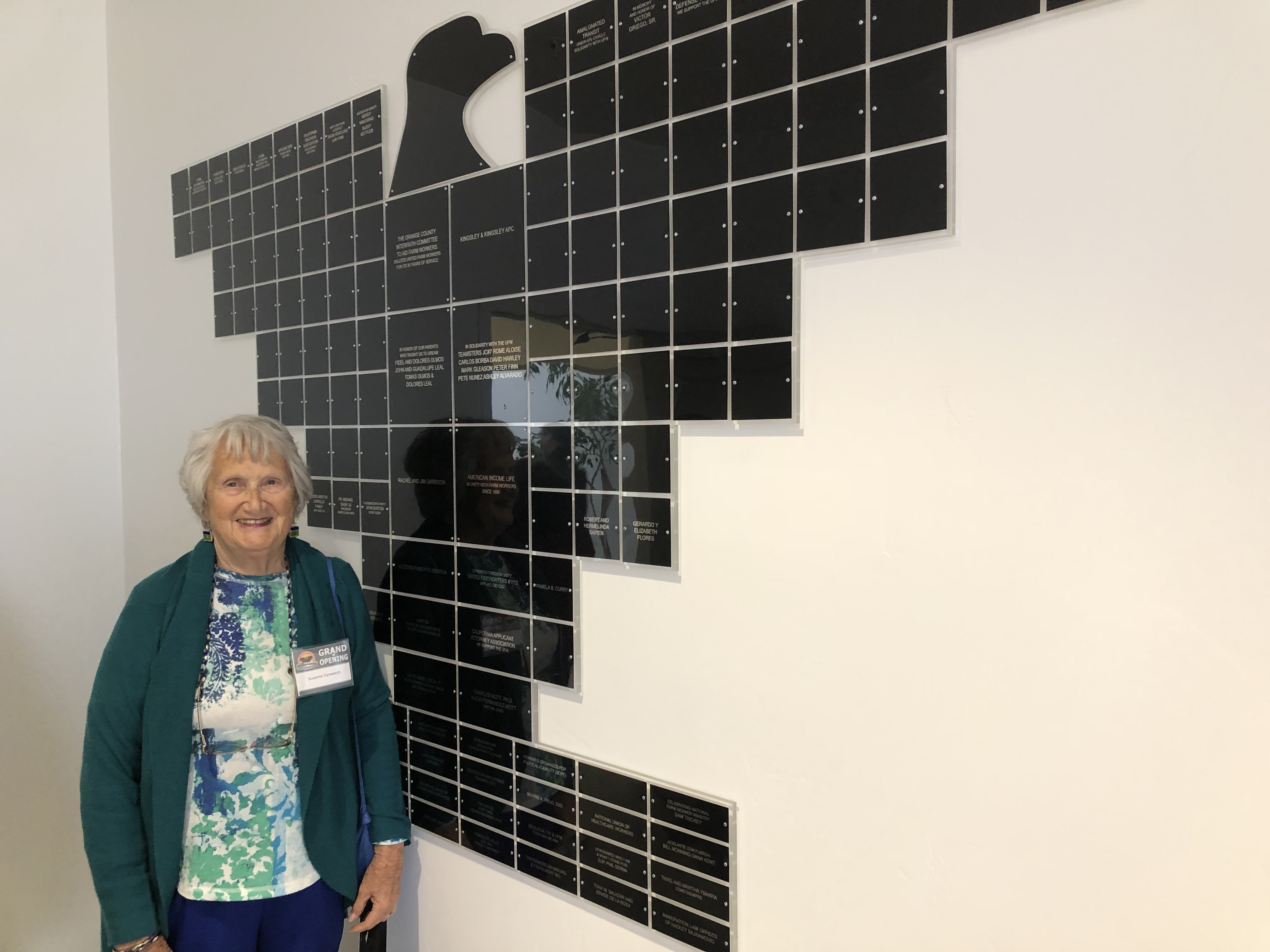 Two farm workers spoke about the role of UFW in their lives and the value of the training and preparation the Center will provide.  Odilia Aldana is the civic action chair for D’Arrigo where she has worked for 22 years.  Rogelio Lona is general secretary for UFW workers at Monterey Mushrooms Morgan Hill.  Remarkably, the President of Monterey Mushrooms, Shah Kazemi, spoke about the benefits of a stable, skilled work force and his appreciation of the new Center.

A surprise was that the famous singer Kris Kristofferson showed up. Though not on the program he closed the proceedings with “Me and Bobby McGee”, including the verse about Salinas.

Diana Tellefson Torres, UFW Foundation, summarized the purposes of the Center including immigration processing and counseling, social and legal services, Robert Kennedy Medical Plan and Juan de la Cruz Pension plan services, as well as training for organizing and contract enforcement. About half the space is for UFW Foundation and half for UFW itself. In his remarks, Artie Rodriguez, UFW President, noted that Cesar Chavez long had wanted a worker center in the Salinas Valley.  UFW even had bought a site, but then had to sell it to meet financial crisis. The immigration hostility and threatening federal farm worker legislation in the 2016 presidential campaign made it urgent, he said, to bring such a center to reality. 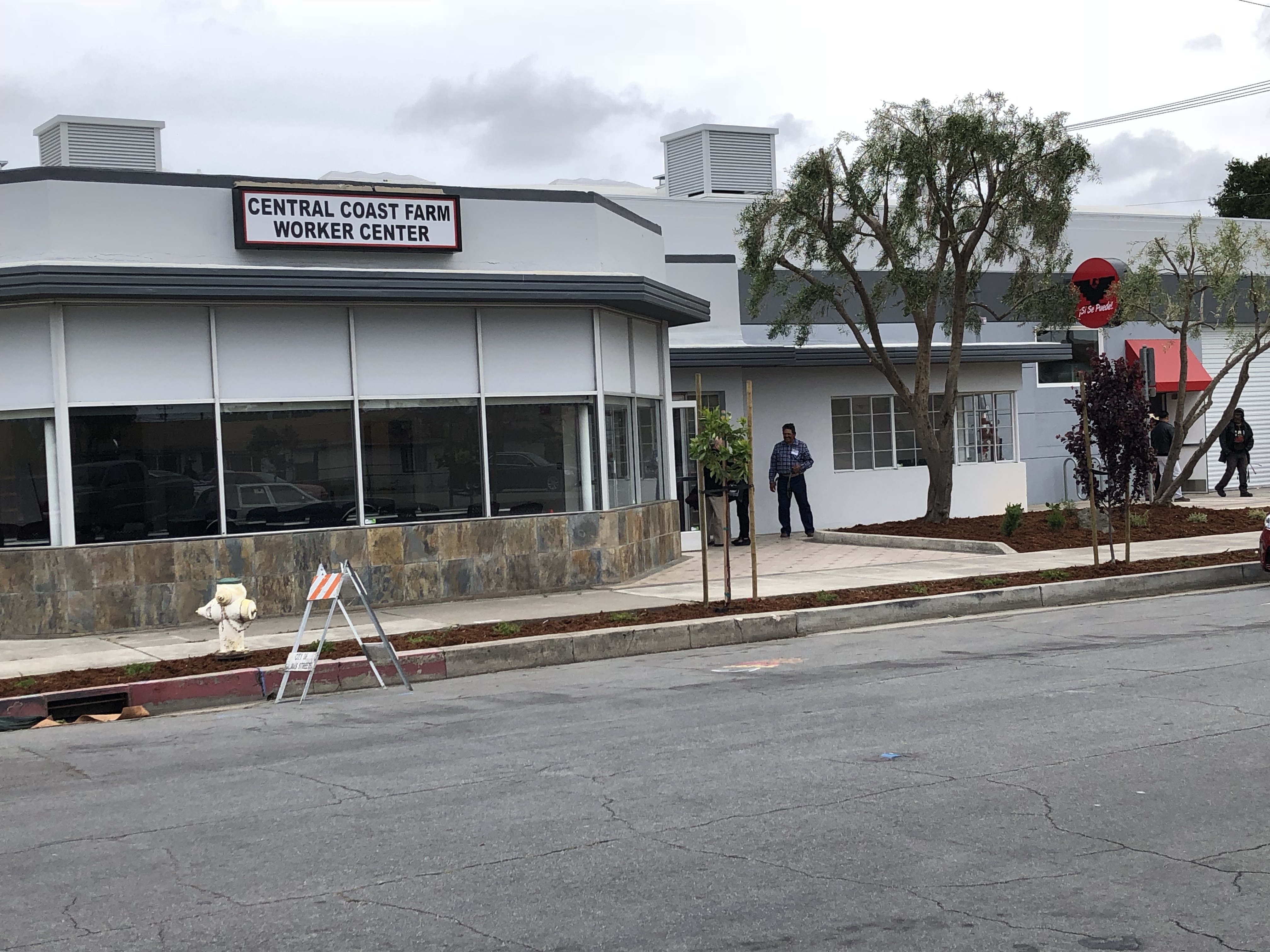 In thanking various donors, Artie specifically recognized both Suzanne and the Orange County.   Committee and NFWM and me.  Over its history, NFWM has been in Salinas several times to demonstrate, visibly, our solidarity with UFW members.  I also talked with some farm workers about their sense of excitement and hope from seeing the Center. One conversation was with an old-timer happy to be covered by the RFK Medical Plan – an illustration of the value of UFW contracts and of the impact of NFWM support when he was younger.

Artie also thanked us in person for coming from Florida.  When the invitation came, my first instinct was just to send UFW the dollars that an air fare would cost.  But when it became clear that NFWM should be represented, Cynthia and I changed plans.  In retrospect it was a good choice –  symbolism can matter a lot and this time it did.