At the January 2018 meeting, the NFWM board adopted a statement of support for the Coalition of Immokalee Workers’ (CIW) Harvest without Violence. This was requested by CIW in support of their Fair Food Program and it’s provision to eliminate violence and harassment.

Coming in March, farm workers will be in New York City for a 5 day Freedom Fast in front of the building where Nelson Peltz, chairman of Wendy’s board of directors, works. NFWM’s executive director, Julie Taylor, will be in NYC to support those fasting and will participate with others in a march for farm worker rights on March 15th. For more about this, contact us or go to CIW’s website. 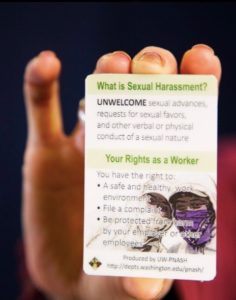 While CIW has helped to bring the issue of violence against women to light, farm worker women around the country have been struggling with this reality too and other efforts are taking place. Time Magazine published an article last fall that included a letter in support of farm worker women who have far less recourse to complain or file grievances than women in Hollywood.

At the time that incidences of violence against women were emerging in the media, other groups were also discussing this. Rosalinda Guillen, of Community To Community (an ally organization with Familias Unidas por la Justicia) in Washington State did an NPR interview to discuss this. A focus on sexual harassment and violence was featured in both a Seattle Times Op Ed and the Yakima Herald this fall that shed light on the under-reporting and why farm worker women are reluctant to come forward.

NFWM is committed to the ongoing support of farm worker food certification programs, union representation, community training programs, along with grievance procedures that provide real consequences for perpetrators and protection of victims of harassment and violence.